This F-16 Fighter Has a Secret Weapon You Can't See 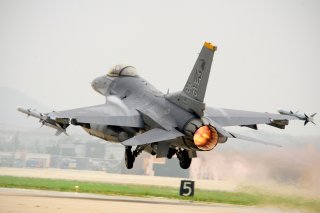 Earlier this year, the Air Force Test Center tested “Collaborative Small Diameter Bombs,” an innovation drawing upon computer algorithms to facilitate in-flight networking with weapons on route to targets. The program, according to an Air Force report, is called Golden Horde. It is built upon the technical concept of Networked, Collaborative and Autonomous, or NCA, weapons.

The Air Force tested whether air-dropped bombs were able to share target-sensitive data with each other in flight to adjust attack specifics, find GPS-jammers, and optimize the speed and precision with which attack operations can be conducted.

“It was another great learning opportunity, as you mentioned. So on the positive side, nine of 13 test objectives are met,” Pringle told The Mitchell Institute for Aerospace Studies in an interesting video interview.

An Air Force description of the Golden Horde technology describes it as a “new capability including a home-on-GPS-jam seeker that gathers information about the battlespace, a software defined radio for communication between weapons and a processor preloaded with collaborative algorithms.”

While the assessments with the F-16 fighter test revealed certain shortcomings or glitches with some of the technology, something which the Air Force has now corrected, Pringle said.

The technology is intended to work by loading pre-mission software onto the weapons to enable advanced autonomy such that in-flight weapons can detect, and even avert, enemy countermeasures to locate targets and, if needed, redirect munitions in flight.

The weapons used in the test, Pringle told Mitchell, “couldn’t accept updated flight profile information from the autonomous onboard processor. And so ultimately, the initial flight profile that was in it is where it ended up. So there were no updates. And the flight never changed. But we have done the forensics on it, we’ve corrected what needed to happen..”

The technical and tactical concept of the weapons collaboration, Air Force assessments explain, are designed to enable sensors integrated into the weapons themselves to discern new information, assess it in relation to front-loaded mission specifics, and perform the analytics needed to make in-flight course adjustments. While fully bringing this to fruition may require even more advanced AI-enabled autonomy, it represents the cusp of very significant breakthrough technology.

Pringle emphasized that additional testing is now underway to address and rectify some of the glitches, and build upon success. She mentioned assessments with as many as four collaborative small diameter bomb weapons and efforts to explore time on targets.

“This program is still progressing and we’re really excited about where it is going in 2021,” Pringle added.