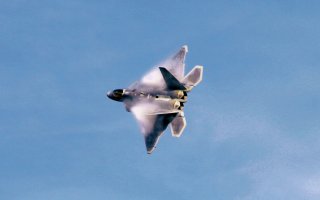 Here's What You Need to Know: Citing budget concerns, Air Force officials have said it is unlikely the service will build new F-22s.

“Air superiority, using stealth characteristics is our primary role. The air dominance mission is what we will always do first. Once we are comfortable operating in that battlespace, our airmen are going to find ways to contribute,” Col. Larry Broadwell, the Commander of the 1st Operations Group at Joint Base Langley-Eustis, Virginia, told Scout Warrior in a special pilot interview.

Zacharias explained that fifth generation fighters such as the F-35 and F-22 are quickly approaching an ability to command-and-control nearby drones from the air. This would allow unmanned systems to deliver payload, test enemy air defenses and potentially extend the reach of ISR misisons.

“Because of its sensors, the F-22 is uniquely able to improve the battlefield awareness - not just for airborne F-22s but the other platforms that are airborne as well,” he said. The Raptor has an F-22-specific data link to share information with other F-22s and also has the ability to use a known data link called LINK 16 which enables it to communicate with other aircraft in the coalition, Broadwell explained in an interview last year.

“The addition of SAR mapping has certainly enhanced our air-to-ground capability. Previously, we would have to take off with pre-determined target coordinates. Now, we have an ability to more dynamically use the SAR to pinpoint a target while airborne,” Broadwell added.

Overall, the Air Force operates somewhere between 80 and 100 F-22s. Dave Majumdar, defense editor here at TNI, writes that many would like to see more F-22s added to the Air Force arsenal. For instance, some members of Congress, such as Rep. Randy Forbes, R-Va., have requested that more F-22s be built, given its technological superiority.

Citing budget concerns, Air Force officials have said it is unlikely the service will want to build new F-22s, however an incoming Trump administration could possibly want to change that.

“Its greatest asset is the ability to target attack and kill an enemy without the enemy ever being aware they are there,” Broadwell added.

"An F-22 squadron led the first strike in OIR (Operation Inherent Resolve). The aircraft made historic contributions in the air-to-ground regime,”