Is the F-22 Raptor Still the World’s Best Stealth Dogfighter? 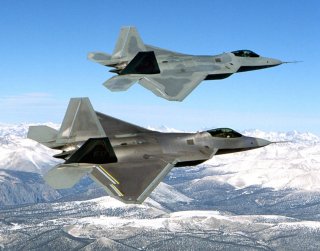 Here's What You Need To Remember: As the Air Force and Lockheed Martin move forward with weapons envelope expansions and enhancements for the F-22, there is of course a commensurate need to upgrade software and its on-board sensors to adjust to emerging future threats, industry developers explained. Ultimately, this effort will lead the Air Force to draft up requirements for new F-22 sensors.

The Air Force is performing key maintenance on the F-22 Raptor's stealth materials while upgrading the stealth fighter with new attack weapons to include improved air-to-air and air-to-surface strike technology, service officials said.

Months ago, the Air Force contracted Lockheed Martin to perform essential maintenance to the F-22's low-observable stealth coating to ensure it is equipped to manage fast-emerging threats.

Also, Air Force officials have told Scout Warrior that, by 2019, the service will begin upgrading F-22 functionality for the AIM-120D and AIM-9X Air-to-Air missiles as well as enhanced Air-to-Surface target location capabilities. The F-22 currently carries the AIM-9X Block 1 and the current upgrade will enable carriage of AIM-9X Block 2.

An essential software adjustment, called “Update 6,” is now being worked on by Lockheed Martin engineers on contract with the Air Force. Work on the software is slated to be finished by 2020,John Cottam, F-22 Program Deputy, Lockheed Martin Aeronautics, told Scout Warrior in an interview several months ago.

"The F-22 is designed to fly in concert with F-35. Software Update 6 for the F-22 will give the Air Force a chance to link their sensor packages together. Sensors are a key component to its capability. As the F-22 gets its new weapons on board – you are going to need to upgrade the sensors to use the new weapons capability," Cottam added.

Like the F-35, the latest F-22s have radar (Synthetic Aperture Radar) and data-links (F-22 has LINK 16), radar warning receivers and targeting technologies. Being that the F-22 is regarded as the world's best air-to-air platform, an ability for an F-35 and F-22 to more quickly exchange sensor information such as targeting data would produce a potential battlefield advantage, industry developers and Air Force senior leaders have explained.