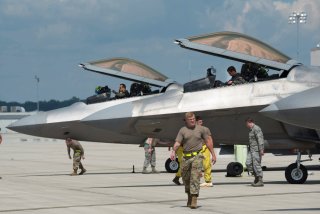 Here's What You Need to Remember: The Air Force has recently conducted a number of ABMS on-ramps to assess and refine technologies able to empower high-speed, cross-domain networking from sensors to shooters.

The Pentagon’s cutting edge strategy for future warfare has many interwoven dimensions, concepts of operations, and weapons systems priorities, yet the thrust of the approach can be succinctly explained in a few words—Find, target, and destroy enemies across vast distances—faster.

Speed of surveillance, speed of targeting, speed of attack, and, perhaps most of all, speed of information sharing driving. All of these tactics are the focus of the Air Force’s Advanced Battle Management Systems program, the Army’s Project Convergence, the Navy’s Distributed Maritime Operations and the overarching, collective Pentagon initiative called Joint All Domain Command and Control.

The Air Force has recently conducted a number of ABMS on-ramps to assess and refine technologies able to empower high-speed, cross-domain networking from sensors to shooters.

“All of our weapons systems need to be interconnected to reduce the amount of time to create effects on targets. You want very rapid decision-making decisions from the lowest possible level,” said Lt. Gen. Joseph Guastella, Deputy Chief of Staff, Operations, Air Force.

Fundamental to this effort is what Guastella described as a need to “elevate weapons systems for more of a high-end fight.”  The entire premise for the application of airpower, he explained, needs to be changed.

Future air war is based on the notion that major air war platforms will no longer function purely as a weapon or attack platform but also operate in equal capacity as a “node” on a broader, interconnected warfare network sharing time-sensitive data across the force in real-time. This is fundamental to the F-35, emerging B-21, and numerous upgraded legacy systems. The B-2 is in the process of receiving a massive sensor upgrade with the Defense Management System, a technology that alerts crews as to the location of enemy air defenses so as to elude them and network the data. The B-52, F-22, and Reaper drone have all received major sensor and communications upgrades in recent years.

“Having a better understanding of how to apply airpower in a high-end environment is something we need to fight for. Our memory has been focused on low-end warfare, and only recently have we pivoted toward being able to deter a high-end adversary and change how we use airpower and what may have been effective in yesterday’s campaign,” Guastella said. For example, during an ABMS demo earlier this year, advanced multi-domain networking helped enable a ground-based Howitzer weapon to track and destroy an attacking cruise missile maneuvering at high-speeds with a hypervelocity projectile. This breakthrough development introduced an entirely new dimension to ground-based air defense as it allowed an armored ground combat vehicle to function in an unprecedented capacity.