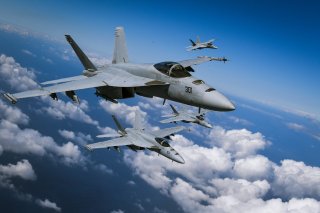 Here's What You Need To Remember: When facing threatening adversaries, the two aircraft types could potentially synergize well, with the Lightning, confined to lighter internal weapons loads when flying in a stealthy configuration, ferreting out targets for the Super Hornets to slug away at from a relatively safe distance.

The single-seat F/A-18E and two-seat F/A-18F are larger, higher-performing evolutions of the 1980s-era F/A-18 Hornet attack plane. Though comparable in many respects to such excellent fourth-generation fighters as the F-15 Eagle, the Super Hornet has a lower maximum speed and is slightly less agile due to the engineering compromises necessary for taking off and landing on Navy carrier’s. On the plus side, the Super Hornet does come with more modern avionics and a unique advantage baked into its airframe: a reduced radar cross-section estimated to be around one square meter from the front, a fraction of that of an F-15 and one of the lowest on any fourth-generation jet fighter.

However, that’s still too conspicuous to be a proper stealth fighter. At best, the Super Hornet’s stealth advantage will modestly decrease the range at which it can be detected and tracked by powerful modern radars. Thus the Pentagon’s push to adopt the F-35 Lightning, which has a radar cross-section of around .001 square meters—potentially three orders of magnitude smaller than the Super Hornet’s. With a genuine stealth fighter like the F-35, U.S. pilots could pick off enemy fighters and air defenses radars from long range with little risk of detection and retaliation—or, at least, so the theory goes. Supposedly, this strategy has been borne out by the lopsided 15:1 kill ratios or better in recent Red Flag exercises pitting the F-35 against non-stealth aircraft.

Another system, the Distributed Targeting Processor Network, allows the Super Hornet’s computer to compare sensor images it receives with a geo-registered database to deliver precise long-range strikes against ground targets—which might help it deal with air defenses from a safer distance. To help pilots cope with information overload, the cockpit is also receiving a new Elbit ten-by-nineteen-inch touchscreen flight display, replacing several smaller monitors in one go.

The most expensive part of the Block III upgrade pays for a Conformal Fuel Tank (CFT), which addresses the Super Hornet’s troublesome short-range on internal fuel. Indeed, the Hornet’s limited combat radius of four hundred to five hundred miles on just internal fuel puts carriers at risk by forcing them to sail closer to hostile shores bristling with new ship-killing weapons. Currently, Super Hornets rely on up to three drop tanks—two underwing, and one under the fuselage—to extend their striking range, as well as aerial refueling by Super Hornet tankers. However, drop tanks enlarge the Hornet’s radar cross-section; cause additional drag, degrading flight performance; and occupy hardpoints that could be carrying weapons.

A conformal tank, on the other hand, is bolted on to “hug” the fuselage at minimal cost to aerodynamics and radar cross-section, giving the upper fuselage a “hulked out” appearance. The Super Hornet’s CFT weighs only 870 pounds empty and can carry up to 3,500 pounds of fuel, extending the combat radius by 130 nautical miles to around 690 (800 miles)—which just so happens to put it closer to the combat radius of an F-35 using only internal fuel. The CFT reportedly creates no additional drag at low speeds, and only minor amounts approaching supersonic or higher. Furthermore, it even slightly reduces the Super Hornet’s radar cross-section, and when fitted to the EA-18 Growler electronic attack plane, causes less obstruction to its ALQ-99 or Next Generation Jammer jamming pods than underwing tanks would.