The F-35 Is Much More Than Just a Stealth Fighter 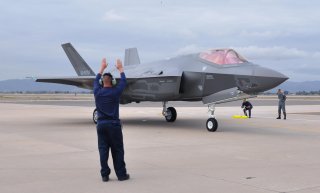 Here's What You Need to Remember: In past days, when aviation technical advancements were more predictable and our policies and strategies were governed by “containment” of a singular foe, combat aircraft design concentrated on going faster, traveling farther, and carrying more lethal weapons than was possible before. That's no longer the case.

Doubts continue about the F-35 stealth fighter jet program. The questions go to more than the usual array of new system challenges of maintenance, sustainment, cost growth and program delays. In those areas the F-35 jet is no different from virtually every other defense procurement project, most far less complex than the F-35 fighter. The private sector has similar challenges, as seen by the travails of the 737 MAX 8 aircraft. The heart of the worries goes to the role of manned aviation in this age of breathtaking technical change.

For quite some time now it has been obvious that we collect far more data than we can analyze in any relevant decision-making time. This challenge becomes more daunting as new systems are brought online. Military and naval commanders, indeed anybody occupying a supervisory position, can suffer paralysis by analysis. The other danger is acting based on what we want to hear, our “gut.” We knew this back in 1995 when the F-35 fighter program began.

In past days, when aviation technical advancements were more predictable and our policies and strategies were governed by “containment” of a singular foe, combat aircraft design concentrated on going faster, traveling farther, and carrying more lethal weapons than was possible before.

In contrast, the F-35 jet, according to the Lockheed Martin site, is designed to be far more than just a fighter jet. It is a “fifth-generation” aircraft designed as a powerful force multiplier with advanced sensors and communications suites that significantly enhance the capabilities of networked airborne, surface and ground-based platforms. It shares critical information—also known as a Common Operational Picture—in the Joint-All Domain Operations battlespace. It is the only fighter in production capable of surviving in contested environments and deterring or defeating near-peer adversaries.

In other words, it is all about the network and making the separate components of the force exponentially more effective than the sum of their parts. Within the ten billion-plus lines of computer code in the aircraft, software the Defense Science Board calls the “primary driver of capabilities in the F-35,” we can expect a robust layer of artificial intelligence to evaluate data much faster and with more accuracy than before, along with deciding which weapons should fire at which targets.

The F-35 jet can still act as a fighter, perhaps with several unmanned systems as “wingmen” to do the close-in kinetic work, and as handy refuelers. Similarly, it can perform ground attack with precision weapons from well beyond the range of most adversary systems. But the “secret sauce” is not its gunfighter role. It is the exploitation of powerful emerging technologies, among them artificial intelligence, machine learning, and related capabilities, to exponentially increase the operational tempo of U.S. and allied forces, to fight outnumbered yet win decisively.

Critical allies and friends, including North Atlantic Treaty Organization countries, as well as Japan, the Republic of Korea, Singapore, Australia, and others share the F-35 program vision of enhanced force integration and interoperability. The F-35 jet is widely fielded, to allied as well as U.S. forces and has flown combat missions. Today—when we are concerned with strengthening our allies and partners—continuing this program and enhancing its rapid development is vital.