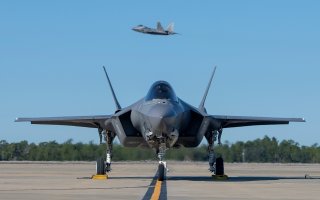 There’s no other jet I’d want to go into combat in than the F-35A, the Air Force’s newest supersonic stealth fighter. As a fighter pilot who’s flown several variants of the legendary F-16 as well as the F-35, I can say that, between the two aircraft, it’s not even a close competition. Comparing the two is like comparing a 90’s corvette to a brand new Tesla—the corvette may have the edge in a few niche categories, but the Tesla is a much more capable car. The general public, however, doesn’t share this sentiment—yet. Let’s look at why.

Over the last decade, there has been a paradigm shift for combat aircraft. This isn’t a new phenomenon, but has happened several times throughout history. In the ’50s and ’60s, the emphasis was on how high and fast a fighter could fly. This led to interceptors such as the F-104 that could travel over twice the speed of sound (1,500 mph) at 50,000+ feet. In the ’70s, ’80’s, and 90’s, it became about how tightly a fighter could turn and how long it could sustain that turn. This led to the development of incredible dogfighters such as the F-16 and F-15.

Since around 2005, there has been another shift taking place. Survivability and lethality in a contested environment now have more to do with stealth, sensors, data fusion, and the ability to network, than just pure turn performance. Unfortunately, it’s difficult to quantify these capabilities in an unclassified environment. Likewise, these attributes don’t showcase well during airshows or while on display.

The next reason has to do with how new technology matures. When new technology is introduced, it often takes several years to work out all the “bugs.” Nearly every piece of technology around you was initially criticized for being inferior when it first came out: the laptop, streaming music, the LCD monitor, the smartphone, the LED light bulb, the list goes on. It takes time to fix the many unforeseen issues that arise from the introduction of new technology.

Fighter aircraft are no different. The F-16, the first fly-by-wire production fighter, was initially known as the “lawn dart” because of the hundreds of crashes that occurred over the first decade of its life. Engineers were able to eventually fix the problems, and the aircraft went on to become the backbone of the U.S. Air Force, as well as many other air forces around the world.

When the F-35 debuted, it was inferior to the F-16 and other 4th generation aircraft. However, its potential has been steadily unlocked by the engineers, and several years ago, it surpassed the F-16’s capability. As the F-35 continues to mature, the difference will continue to grow considerably.

Lockheed did, however, build many of these “inferior” F-35’s by choosing to merge the development and production of the aircraft. Instead of building a test fleet of prototypes, finalizing the design, and then producing the aircraft, they merged the steps into what is known as concurrency. This had the effect of shortening the F-35 timeline by several years, however, it came at the cost of knowing that early production F-35’s would need to be retrofitted as problems were identified.

The jury is still out as to whether this collapsed timeline was worth it, however, it had the effect of appearing for several years as though an inferior fighter was being built.

The last major reason the F-35 has seen so much criticism is that it was the first jet developed in the social media age. The paradigm shift, cost, and early problems, coupled with concurrency, led to an explosion of negative social media that grew into mainstream media coverage.

Just imagine how the F-16 program would have been covered today when they were crashing an aircraft almost every two weeks during several years in the ’80s and ’90s (the F-35, by comparison, has only crashed 3 times in over a decade of flying).

If you separate the noise and talk to current fighter pilots who’ve flown with or against F-35’s in the last few years, they will tell you the impact and value the jet has on the battlefield. This isn’t theoretical or something that may happen in a few years; the transition has already occurred. The F-35, along with the F-22, is now the premier fighter aircraft in the world.