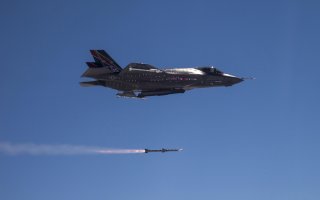 Key Point: Crews can hang tons of missiles and bombs from the wings, albeit at the cost of the F-35’s radar stealth.

David Axe served as Defense Editor of the National Interest. He is the author of the graphic novels  War Fix,War Is Boring and Machete Squad. ​This article first appeared in 2019 and is reprinted here due to reader interest.