F-35 Vs. A-10 Warthog: Which Plane Wins the Battle for Close Air Support King? 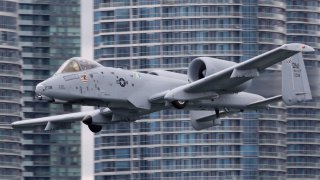 Here's What You Need To Remember: Regardless of the conclusions arrived upon by the ongoing assessment, it is likely both the A-10 and F-35 will perform CAS missions in the immediate years ahead.

The US Army wants the F-35 to support its ground troops.

It’s that simple. We hear volumes of information about the Marine Corps vertical-take-off-and-landing F-35B, Navy carrier-launched F-35C and Air Force F-35A - but what does the Army think of the emerging Joint Strike Fighter?

Does the Army think the 5th-Gen stealth fighter would bring substantial value to targeting and attacking enemy ground forces in close proximity to advancing infantry? What kind of Close Air Support could it bring to high-risk, high-casualty ground war?

“When you are in a firefight, the first thing infantry wants to do it get on that radio to adjust fire for mortars and locate targets with close air support with planes or helicopters. You want fires. The F-35 has increased survivability and it will play a decisive role in the support of ground combat,” Army Chief of Staff Gen. Mark Milley told reporters at the Association of the United States Army Annual Symposium.

Gen. Milley’s comments are quite significant, given the historic value of close air support when it comes to ground war. His remarks also bear great relevance regarding the ongoing Pentagon evaluation assessing the F-35 and A-10 Warthog in close air support scenarios.

Over the years, close-air-support to Army ground war has of course often made the difference between life and death - victory or defeat. The Army, Milley said, wants next-generation close-air-support for potential future warfare.

“We fight with the Navy, Marines and Air Force. Our soldiers have never heard an Air Force pilot say ‘I can’t fly into that low-altitude area,’ These guys take incredible risk. If there are troops on the ground, they are rolling in hot,” Milley said.

While Milley of course did not specifically compare the A-10 to the F-35 or say the Army prefers one aircraft over another, he did say the F-35 would be of great value in a high-stakes, force-on-force ground war.

Long-revered by ground troops as a “flying-tank,” the combat proven A-10 has been indispensable to ground-war victory. Its titanium hull, 30mm cannon, durability, built-in redundancy and weapons range has enabled the aircraft to sustain large amounts of small arms fire and combat damage - and keep flying.

At the same time, as newer threats emerge and the high-tech F-35 matures into combat, many US military weapons developers and combatant commanders believe the JSF can bring an improved, new-generation of CAS support to ground troops. Thus - the ongoing Office of the Secretary of Defense comparison.

Accordingly, the Pentagon-led F-35/A-10 assessment is nearing its next phase of evaluation, following an initial “first wave” of tests in July of this year, Vice Adm. Mat Winter, Program Executive Officer, F-35 program, recently told a group of reporters.

“Mission performance is being evaluated in the presence of a robust set of ground threats and, to ensure a fair and comparable evaluation of each system’s performance, both aircraft are allowed to configure their best weapons loadouts and employ their best tactics for the mission scenario” a statement from the Director, Operational Test & Evaluation said.

Upon initial examination, some might regard a stealthy, 5th-Gen F-35 as ill-equipped or at least not-suited for close air support. However, a closer look does seem to uncover a handful of advantages - speaking to the point Milley mentioned about survivability.

Long-range, computer-enabled F-35 sensors could enable the aircraft to see and destroy enemy ground targets with precision from much higher altitudes and much farther ranges than an A-10 could; the speed of an F-35, when compared to an A-10, would potentially make it better able to maneuver, elude enemy fire and get into position for attack; like the A-10s 30mm gun, the F-35 has its own 25mm cannon mounted on its left wing which could attack ground forces; given its sensor configuration, with things like a 360-degree Distributed Aperture System with cameras, the F-35 brings a drone-like ISR component to air-ground war. This could help targeting, terrain analysis and much-needed precision attacks as US soldiers fight up close with maneuvering enemy ground forces.

An F-35 might be better positioned to respond quickly to enemy force movement; in the event that enemy air threats emerge in a firefight, an F-35 could address them in a way an A-10 could not, obviously; an F-35 would be much better positioned to locate enemy long-range fires points of combat significance and destroy hostile artillery, mortar or long-range-fires launching points. Finally, while the A-10 has a surprising wide envelope of weapons, an F-35 could travel with a wider range of air-ground attack weapons - armed with advanced targeting technology.

There are, however, some unknowns likely to be informing the current analysis. How much small arms fire could an F-35 withstand? Could it draw upon its “hovering” technology to loiter near high-value target areas? To what extent could it keep flying in the event that major components, such as engines or fuselage components, were destroyed in war? How much could A-10 weapons and targeting technology be upgraded?

Regardless of the conclusions arrived upon by the ongoing assessment, it is likely both the A-10 and F-35 will perform CAS missions in the immediate years ahead.

When it comes to the Army and the F-35, one can clearly envision warfare scenarios wherein Army soldiers could be supported by the Marine Corps F-35B, Navy F-35C or Air Force F-35A.

“We don’t fight as an Army - we fight as a joint force. What makes us different is the synergistic effect we get from combining various forces in time and space,” Milley said.