The F-35 Is a Wargame Champion 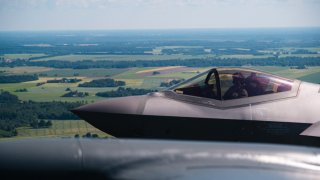 Here's What You Need to Remember: Whereas earlier Red Flag exercises prioritized survivability, recent sessions have taken steps to incorporate a more diverse set of criteria that include reconnaissance and surveillance, as well as air superiority and strike operations.

Over one decade since its first flight, Lockheed Martin’s F-35 Lightning II has earned an extensive and consistently impressive performance record in the most challenging wargames to date.

Conceived in the mid-1970s, Red Flag is widely regarded as the US Air Force’s (USAF’s) premier aerial combat exercise. Held in ten to twelve annual installments that are spread between the Nellis Air Force Base in Nevada and Eielson Air Force Base in Alaska, the two-week exercises involve as many as one-hundred aircraft tested in accurate training conditions. Whereas earlier Red Flag exercises prioritized survivability, recent sessions have taken steps to incorporate a more diverse set of criteria that include reconnaissance and surveillance, as well as air superiority and strike operations.

The F-35A’s major Red Flag debut came in 2017, shortly after the fighter was declared as having reached initial operational capability (IOC). Thirteen F-35 pilots from the 388th Fighter Wing’s 4th Fighter Squadron went up against advanced anti-air threats, including enemy air defenses and air-to-air fighters. The results were unambiguous. The F-35’s dominated the notional enemy, achieving a kill ratio of fifteen to one whilst scoring direct hits with twenty-five out of twenty-seven inert weapons dropped. This, despite the fact that the goal was less to test the F-35’s combat prowess than its ability to act as a “quarterback in the sky” for other friendly aircraft. Here, the results were equally as unambiguous: the F-35’s proved their ability to act as a force multiplier for older fourth-generation aircraft like the F-16, utilizing their sensor fusion suite to give legacy aircraft what one pilot called a “god’s eye view” of the battlefield. “Situational awareness is king,” added Col. David Lyons, commander of the 388th Fighter Wing. “Everybody’s SA is improved when the F-35 is on the battlefield.”

Nor was it a one-off, with the 4th Fighter Squadron replicating similarly impressive results during Red Flag’s 2019 exercises. The F-35’s were integrated into a larger “Blue Force” and pitted against a sixty aircraft-strong “Red Force” of “equally capable” fighters while subjected to a constant stream of communications jamming and GPS denial attacks.

"Even in this extremely challenging environment, the F-35 didn’t have many difficulties doing its job," said Col. Joshua Wood, 388th Operations Group commander. “That’s a testament to the pilot’s training and the capabilities of the jet.” As with the 2017 exercises, F-35 pilots raved about the fighter’s survivability and sensor fusion capabilities. “With stealth, the F-35 can get closer to threats than many other aircraft can. Combined with the performance of the fused sensors on the F-35, we can significantly contribute to the majority of the missions,” said 1st Lt. Landon Moores. “As this aircraft matures, we continue to see it be a significant force-multiplier in a threat-dense environment,” he added. “Red Flag was a success for us and has made our younger pilots more lethal and more confident.”

Beyond Red Flag, the F-35 has proven itself in region-specific exercises. A recent series of wargames found that the imminent Block 4 revision of the F-35 is one of the few fighters capable of meaningfully contributing to US efforts to counter a full-scale Chinese invasion of Taiwan, widely recognized as one of the most difficult potential scenarios facing the U.S. military today.

The large body of data gathered from Red Flag and other recent exercises could not be any clearer: even in highly demanding battlefield circumstances, the F-35 continues to meet and exceed USAF’s expectations.