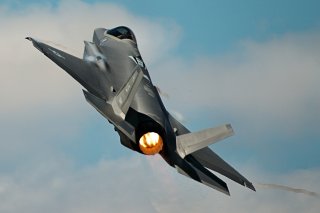 In August 2020 the United States Air Force was set to receive its 250th Lockheed Martin F-35A Lightning II, and with that milestone, the fifth-generation multirole stealth warplane became the third-largest fighter fleet in the service's fleet. That number also accounted for nearly half of the total F-35s of all variants delivered worldwide to that point.

The Air Force's program of record is to purchase and acquire a total of 1,763 F-35As – and 48 of the advanced aircraft have been requested in each of the last three budgets, while Congress has also increased the purchase in recent funding cycles.

With a range of 1,200 nautical miles with its internal tanks and ability to reach Mach 1.6 (1,200 mph), the single-engine, single-seat F-35A was selected to replace the United States Air Force's aging fleet of F-16 Fighting Falcons and A-10 Thunderbolt IIs. The conventional takeoff and landing (CTOL) variant of the U.S. military's fifth-generation Joint Strike Fighter was designed to operate from conventional runways and is the most commonly produced variant. It is employed by the U.S. Air Force as well as by the majority of F-35 international allied customers, and it provides its operators with the ability to maintain air supremacy around the globe.

The F-35A is powered by a Pratt & Whitney F135-PW-100 turbofan engine, which provides 43,000 pounds of thrust, consists of a three-stage fan, a six-stage compressor, an annular combustor, a single-stage high-pressure turbine, and a two-stage low-pressure turbine. In addition, the aircraft was developed to provide its pilot with unsurpassed situational awareness, positive target identification, and precision strike in all weather conditions.

According to the United States Air Force, the F-35's electronic sensors include the Electro-Optical Distributed Aperture System (DAS), which further provides pilots with situational awareness in a sphere around the aircraft for enhanced missile warning, aircraft warning, and day/night pilot vision. Moreover, the F-35A is equipped with an internally mounted Electro-Optical Targeting System. It provides extended range detection and precision targeting against ground targets, plus long range detection of air-to-air threats. Pilots are also equipped with a revolutionary, state-of-the-art helmet-mounted display system that provides all of the intelligence and targeting information to complete a mission displayed directly on the helmet's visor.

Despite being the smallest and lightest version of Joint Strike Fighters, the F-35A is also capable of reach 9Gs, the highest of the variants. It is also the only version of the Lightning II to be equipped with an internal 25mm GAU-22/A 4-barrel rotary cannon. Lockheed Martin, the aircraft's manufacturer, had to address issues of cracks in the fuselage of the Lot 9 build developing from the use of the gun. The problem resulted in the Air Force restricting the gun to combat use only in those aircraft in order to avoid unnecessary damage to the sensitive low-observable coatings on the aircraft.

While there are still issues to be addressed with the advanced aircraft, it remains on track to eventually become the primary multirole fighter for the Air Force in the coming years.