F-35s are Making Aircraft Carriers Deadlier Than Ever 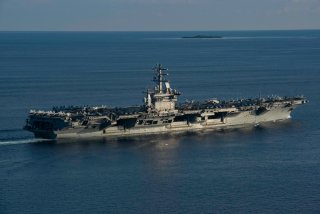 Here's What You Need to Remember: If an F-35C or F-18 can be refueled in flight by a carrier-operated drone refueler, they will not only have more dwell time over targets but they will be able reach target areas and project power from carriers operating at safer standoff ranges.

U.S. Navy aircraft carriers are said to be extremely vulnerable to modern missile attacks, since they represent huge floating targets that are less agile and mobile in high threat circumstances. In fact, some commentators have gone so far as to wonder if recently emerging long range anti-ship missiles may have rendered aircraft carriers obsolete.

This is not true, at least according to many prominent Navy leaders, weapons developers, futurists and influential members of Congress. All of these leaders clearly explain that America’s signature emblem of maritime power is going nowhere.

“The aircraft carrier is still the most powerful platform for power projection, and the concept is still extraordinarily vital. If it was not the Chinese wouldn’t be building aircraft carriers. So they are looking to catch up because they understand you’ve got to deploy power away from your shores,” Rep. Rob Whitman -(R) Va., ranking member on the House Armed Services Committee Subcommittee on Seapower and Projection Forces, told The National Interest in an interview.

While there will be adaptations to new threats, such as greater use of amphibious assault ships for airpower and much broader use of unmanned systems, the fundamental premise of carrier operations and emerging Ford-class aircraft carriers, appear here to stay.

Alongside advancing a clear sense that existing aircraft carrier power projection is something which should both remain and simultaneously adapt to emerging threats, Wittman was also enthusiastic about the additional mobility and multifunctional advantages of amphibious assault ships, now increasingly capable of projecting long-range airpower with the arrival of the F-35B stealth jet fighter.

As has been the case for years, the Navy will continue to study questions about future carrier configurations with a close eye upon new threats, weapons, and potential enemy tactics, yet many believe that a emerging consensus may be emerging. Such advocates argue that newer aircraft carriers, if properly defended and fortified by range-extending platforms such as carrier-launched drone refuelers, are likely to endure throughout this century.

The reasons for this may simply be too numerous, interwoven and complex to specify, yet several do immediately come to mind. Emerging layered ship defenses are now enabled by laser interceptors, electronic warfare applications able to jam missile targeting systems and new generations of longer-range precision interceptor missiles increasingly able to change course in flight to destroy incoming attacks.

All of this bears upon the almost “all too often discussed” threat equation presented in the Pacific by Chinese DF-26 and DF-21D carrier killer anti-ship missiles which can reportedly hit carriers at ranges of 2,000 and 1,000 miles respectively. The weapons are regularly test fired and cited in Chinese newspapers as being highly effective and able to deny access to vital strike ranges from which carriers might need to operate.

The rhetoric about these missiles, however, often overlooks several key variables of great significance to the tactical equation, such as the extent to which the MQ-25 Stingray carrier-launched refueler drone might actually double the strike range of carrier-launched aircraft. If an F-35C or F-18 can be refueled in flight by a carrier-operated drone refueler, they will not only have more dwell time over targets but they will be able reach target areas and project power from carriers operating at safer standoff ranges. Also, there is likely a reason why so many Navy leaders regularly say the service can operate carriers anywhere it needs to, meaning the breakthrough levels of ship defenses, coupled with the added protections from ships in a Carrier Strike Group, enable carriers to operate in high threat areas to a much larger extent than may be realized.

“I think that the aircraft carrier will continue to be a viable option, mainly because, you know, our effort is to keep any sort of conflict away from conus. And the only way to do that is to protect power. So nobody has come up with a substitute for that in today’s world,” Wittman said. “We can probably dock our ships in allied ports and stage many operations from friendly countries, however the 20th century concept of basing in foreign nations is something that’s not going to happen in the future.”

Kris Osborn is the defense editor for the National Interest. Osborn previously served at the Pentagon as a Highly Qualified Expert with the Office of the Assistant Secretary of the Army—Acquisition, Logistics & Technology. Osborn has also worked as an anchor and on-air military specialist at national TV networks. He has appeared as a guest military expert on Fox News, MSNBC, The Military Channel, and The History Channel. He also has a Master’s Degree in Comparative Literature from Columbia University. This article is being republished due to reader interest.