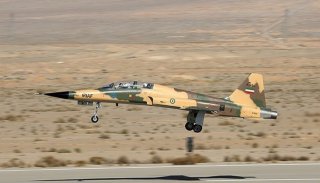 Here's What You Need to Remember: The latest F-5 iteration, the Kowsar, was shown in an unveiling ceremony in 2018 — attended by Iranian President Hassan Rouhani — claimed once again that this time, they had manufactured at “fourth generation” jet fighter completely domestically.

The American-designed Northrop F-5 was first drawn up in the late 1950s or early 1960s. Originally envisioned as a highly aerodynamic fighter with good handling characteristics, including high thrust and supersonic flight, and ease of maintenance.

Prior to the Iranian revolution, Iran received extensive American military aid—the Imperial Iranian Air Force was no exception and received hundreds of F-5s in several variants. Iran had also received a number of more advanced fighters from the United States and other countries, which resulted in a sell-off of their F-5 frames, though they retained several for training purposes, or as aggressor aircraft for pilot training.

In the United States, the F-5 platform plays mostly the role of aggressor aircraft for both the U.S. Marine Corps and the U.S. Navy.

In an interview, a former F-5 aggressor pilot spoke highly of the F-5.

The F-5 was a pair of engines and wings . . . It was so simple and it was perfect for reservists. A Tiger [F-5 variant] so outfitted can provide Super Hornets and F-35s a legitimate threat, especially in the training environment.”

In or around 1997, the Iran Aircraft Manufacturing Industrial Company (acronym HESA), revealed the Azarakhsh “Lightning” fighter jet. HESA claimed that the fighter jet was completely domestically produced and that their manufacturing sector was ready for the fighter jet to be mass-produced. Apparently, five or six airframes have been built since then.

While HESA claimed that the Azarakhsh design was completely home-grown, it has clearly relied heavily on the F-5 design, although it may actually have improved thrust engines and a stronger fuselage to handle the extra stress.

In the mid-2000s, Iran claimed to produce yet another airframe, again a supposedly totally home-grown aircraft, the HESA Saeqeh.

In an interview with CNBC, Joseph Dempsey, a defense and military analysis research associate at the International Institute for Strategic Studies (IISS), commented on Iran’s claim of a completely domestically-manufactured aircraft, saying “The Iranians probably have the industrial capacity to at least make fuselage assemblies for this aircraft. They have obviously been able to make bits of these things,” acknowledging at least some degree of Iranian design.

As pointed out previously, Iran does likely have the ability to domestically manufacture some parts of the Saeqeh, going so far as to release a video of the airframe’s assembly line. That the Saeqeh is totally domestic, is probably false — they’re more likely refurbished and upgraded F-5s that were not flyable.

In all fairness, the Saeqeh does have one very noticeable difference, it’s tail. It has two tail stabilizers in a V setup, rather than the F-5s single tail stabilizer. In addition, it had modified jet intakes, but likely comes from refurbished F-5 airframe stocks.

The latest F-5 iteration, the Kowsar, was shown in an unveiling ceremony in 2018 — attended by Iranian President Hassan Rouhani — claimed once again that this time, they had manufactured at “fourth generation” jet fighter completely domestically.

Babak Taghvaee, a frequent commentator on Iranian defense had the following to say when the  Kowsar was revealed, “Watch propaganda of #Iran’s Islamic Regime. An hour ago, a forty-two years old # US-made F-5F which is just a testbed for avionic of Iranian Air Force future training jet (Kowsar-88) was unveiled & claimed to be a 4th Generation Fighter jet completely designed & manufactured in #Iran!”

Though the F-5 was a capable light attack jet fighter when created nearly 60 years ago, it is unlikely it could pose a threat to modern jet fighters, especially those with stealth capabilities and with adequate training.

Still, it’s good enough for a training jet for the Marines and the Navy, though its capabilities, and Iran’s aircraft manufacturing capabilities, should be taken with a large grain of salt.