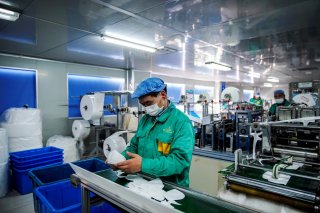 China’s export machine has shifted up a gear, with global sales close to a record levels in July and August as its manufacturers respond to the demand generated by Covid-19 stimulus programs in Europe and the United States.

With global trade volumes facing a steep fall and prices also depressed, China’s share of world exports, which reached 13.5% last year, is likely closer to a record 16% now, which would be almost double the share of the US.

China’s imports are down because its own economy is still feeling the effects of the pandemic, so its surpluses are rising. China’s efforts to stimulate its economy have focused on supplying business credit, rather than supporting the incomes of displaced workers, which has been the primary response among most rich countries.

Leading trade economist Brad Setser, with the US Council on Foreign Relations, says that with rising exports and falling imports, China appears headed for a current account surplus of US$400 billion by the first quarter of next year, which he predicts will become a source of global friction.

China’s exports to the US in August were 20% higher than a year earlier, while its imports were only 1.8% higher, despite US President Donald Trump’s vaunted trade deal. China’s imports from Australia in August were down by a massive 26%, partly because of lower iron ore volumes, but likely also reflecting the political tension.

It is precisely because of the friction that China’s export dependence was generating, particularly with the US, that the politburo earlier this year embraced a new economic strategy, with the cumbersome title of ‘dual circulation’, intended to increase the importance of the domestic market.

The new imperative, as spelled out by the politburo’s May meeting, is to ‘fully bring out the advantage of China’s super-large market scale and the potential of domestic demand to establish a new development pattern featuring domestic and international dual circulations that complement each other.’

Translated from its jargon, the idea is that the focus of China’s growth should shift from international integration (the first circulation) to domestic self-reliance (second circulation).

Details of the strategy will not be unveiled until the release of the 14th five-year plan in 2021, but a report by Center for Strategic and International Studies analysts Jude Blanchette and Justin Polk describes it as ‘the latest, and perhaps most consequential, development in the Xi administration’s ongoing efforts to position China to withstand volatile geopolitical exigencies’.

They say it is calculated ‘to fortify China’s economic resilience in the face of global economic undulations and a general retreat from globalization among Western democracies’, adding that the impact on the world economy could be momentous. ‘Even a marginal shift by China away from its focus on mercantilist export practices could fundamentally reshape global trade and investment flows.’

While the Chinese authorities will make a concerted and potentially successful effort to strengthen domestic capabilities in high-technology sectors such as microchip manufacturing, where US sanctions leave them vulnerable, it is doubtful that the proposed broad economic realignment will be achieved.

As finance professor at Peking University Michael Pettis explains, China has been pursuing a strategy of boosting domestic consumption for years without success. A 2007 speech by the then premier Wen Jiabao, which drew on International Monetary Fund research, promised that the government would make it a priority to rebalance domestic demand towards a greater focus on consumption.

Household spending accounts for just 38% of the Chinese economy, which is one of the lowest shares in the world. Other countries with similarly low shares are Singapore, Saudi Arabia, Ireland and Luxembourg, but they each have tiny populations relative to their business sectors. In other large emerging countries like India, Brazil and South Africa, the consumer share is 55% to 60%, as is also the case in most advanced nations.

Since Wen’s speech, the consumer share of GDP has risen by only 2 percentage points, and that gain will be lost entirely this year, because households have responded to the surge of unemployment following the coronavirus outbreak by slashing consumption and redoubling their savings.

Pettis says that to rebalance the economy to give consumers anything approaching a normal share of the benefits of the economy would require shifting 10% to 15% of GDP away from businesses, the wealthy and government to households. ‘Rebalancing involves a massive shift of wealth—and with it political power—to ordinary people. This will not be easy.’

He notes that China’s export strength, on display in the latest trade figures, depends on the workforce receiving a very small share of what they produce, either directly through wages or through the social safety net.

‘China can only rely on domestic consumption to drive a much greater share of growth if workers begin to receive a much higher share of what they produce, so the very process of rebalancing must undermine China’s export competitiveness.’

As has been evident this year, the first instinct of the Chinese authorities when faced with economic adversity is to redouble lending to businesses. Total debt (public and private sectors) has doubled to 320% of GDP since Wen’s 2007 speech, a level that is without precedent in the emerging world. Pettis says it will rise a further 20 percentage points this year.

China’s economic model has been accompanied by social stability partly because there has been employment growth as the economy expands, even if income levels remained low.

However, in the wake of coronavirus, many employees lost their jobs or had wages cut. While the wealthy have been little affected by the downturn, the 290 million migrant workers in the cities have been hit hard.

China’s social fabric may be more fragile than its monolithic party and all-conquering exporters make it appear. It will be hard to communicate the benefits of a ‘dual circulation’ economic strategy to the masses.

David Uren is a non-resident fellow with the United States Studies Centre at the University of Sydney.