Fact: An F-35 Stealth Fighter Once Took the Place of an A-10 Warthog 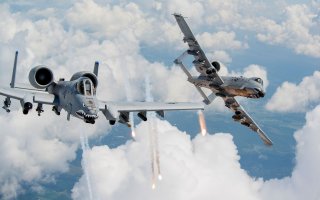 Key Point: It's the pilot that really matters.

A U.S. Air Force A-10 Warthog squadron from Missouri deployed to Hawaii to train alongside the U.S. Marine Corps for one of the most dangerous missions in aerial warfare -- and one that's about to get a lot more dangerous.

Slipping past enemy defenses to rescue a downed pilot.

The A-10 soon might have company on such missions as other plane types, potentially including stealth fighters, join in. But a rescue pilot's experience level always will matter the most, regardless of the kind of plane they fly.

The 303rd Fighter Squadron, an Air Force Reserve Command unit whose home station is Whiteman Air Force Base, in February 2019 deployed to Marine Corps Base Hawaii. The squadron's A-10s took part in a range of realistic training events that took advantage of the nearly-four-decade-old Warthog's low speed, maneuverability and toughness.

"TRAP is a Marine Corps mission performed by any combination of aviation, ground or waterborne assets for the specific purpose of the recovery of personnel, equipment and/or aircraft when the tactical situation precludes search and rescue assets from responding and when survivors and their location have been confirmed, Joint Publication 3-50, the Pentagon's official personnel-recovery guide explains.

In one famous example in 1995, Marine CH-53 helicopters transported a platoon of Marine riflemen into Bosnia to rescue U.S. Air Force pilot Scott O'Grady, whose F-16 had been shot down by a Serb SA-6 missile. Marine AV-8B attack planes escorted the CH-53s.

TRAP is dangerous, as it requires forces quickly to infiltrate enemy air space. The peril escalates as rescue forces approach the downed pilot. "This period is very dangerous because it requires two parties, unknown to each other and located in hostile territory, to meet without being detected by either enemy forces or elements of the local population and without compromising either party’s security," the recovery guide explains.

A-10s are ideal as rescue escorts. They can fly low and slow around the rescuers and the downed pilot, quickly peeling off to fire their guns at any enemy forces that threaten the recovery.

But flying low and slow could expose the Warthogs to enemy fire. TRAP could get more dangerous as that latest Russian- and Chinese-made air defenses proliferate and allied stealth aircraft penetrate deeper and deeper into enemy territory.

Critics of the A-10 contend that the 1970s-vintage, non-stealthy A-10 cannot survive high-tech enemy defenses. The Air Force as early as 2013 wanted prematurely wanted to retire its roughly 300 Warthogs in order to free up a few billion dollars for more F-35 stealth fighters.

Congress blocked the proposal and the A-10s remain in service -- and continue training for the TRAP mission.

Hedging its bets, the Air Force developed tactics for F-15Es, F-16s and even F-35s to help escort rescue forces. The 422nd Test and Evaluation Squadron at Nellis Air Force Base in Nevada around 2016 began trying out F-15Es and F-16s in the rescue role and, according to Combat Aircraft magazine reporter Steve Davies, found that both could do the job, each in its own way.

But then the surprise. The squadron’s F-35s got involved.

"The F-35 was not a formal part of the test," Davies wrote, "but became involved only when the squadron commander needed an A-10 ... pilot and the only one available was a current F-35 pilot."

"In the middle of the test, we threw a couple of F-35s into the fray," Lt. Col. Joshua Wood, the 422nd TES’s commander, told Davies. The lead F-35 pilot, flying an older F-35A with rudimentary Block 1B software, wound up coordinating the entire mock rescue.

And excelling. "No kidding, he shows up and within five minutes on station he’s quarterbacked the whole thing," Wood recalled. "They’ve rescued the survivor and everyone goes home." Wood attributed the test success to the former A-10 pilot’s deep experience as a rescue-escort pilot — and to the F-35’s high-tech sensors.

But Wood stressed to Davies that the F-35 does TRAP differently than the A-10 does. Warthog pilots fly low and slow, keeping their eyes on the ground, both to take advantage of their plane’s toughness and excellent handling and to stay below enemy radar coverage.

F-35 pilots can fly high, beyond the reach of many enemy defenses. Which is good, because the F-35 comparatively is fragile. Fortunately, the lofty vantage also gives pilots a wider view of the battlefield for the stealth fighter’s sophisticated radar, electronic receivers and cameras.

It's the pilot that really matters. Which is why training, such as the 303rd Fighter Squadron experienced in Hawaii, is so important. "I’m not worried about the future of [the rescue mission]," Wood said, "because if I were looking at a scale of how important the platform is versus how important the training of the pilot is, I would say 75 percent is the pilot."