Fact or Fiction? This is How China Could Conquer Taiwan 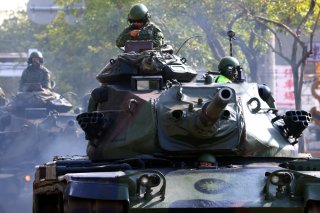 Here's What You Need to Remember: Despite the best efforts of the PRC, the Chinese people were getting pissed, not just at Taiwan but at us for helping them. Say what you want about communism and Mao and the party and all that, China is a nation-state and the nation had its pride wounded.

Moderator: Admiral Gaumon, I can’t thank you enough for speaking with us on this anniversary of the second Battle of the Philippine Sea. It goes without saying this is an emotional day for all Americans and I can only imagine how difficult today is for you.

RADM Gaumon (ret.): Thank you, Steve. I know all Americans have heard some version of this story or another but there is a lot to tell. Many brave men and women fought and died on this day and I just hope their stories are not soon forgotten. This is about remembering them, the sacrifices they made, and, to be quite honest, what we did to fail them. I can’t say I’m glad to be telling that story, but for whatever reason I’m still around to tell it and I think that’s important to do.

Moderator: And sir, we thank you for that. Today I’d like to talk about why the war started. You have a fascinating perspective on the events that led up to the war that I think our listeners would appreciate hearing. Most Americans know the names: Stennis and Roosevelt but I must say I’m consistently surprised with how few know the name Ma Su-Wei, let alone know anything about her.

RADM Gaumon: It’s interesting you say that because even over at Indo-Pacific Command very few of us were tracking the Taiwanese elections that year. We of course took note when the PLAN started playing with their naval parade schedule but frankly PLA posturing before Taiwanese elections was nothing new.

RADM Gaumon: I don’t want to say we had no idea what was going on. Without getting into specifics, those of us high up on the operational side, as well of course as those in Washington, knew pretty early on that the Ministry of State Security was very interested in the election but again, nothing new there. I mean it provided more fodder for people in and out of government to talk about how “‘the cyber’ was going to change democracy as we knew it” but it looked manageable. Information operations and shows of force were nothing out of the ordinary. They were posturing, and we reminded them we were in the neighborhood.

Moderator: You mean the Roosevelt taking up station in the Philippine Sea?

RADM Gaumon: More or less. We put more bombers out at Anderson, put out Rapid Raptor elements at Kadena and Misawa, just generally trying to remind the PLA that we weren’t messing around.

Moderator: And did that work?

RADM Gaumon: I mean, you have to understand that this was kind of how the game was played before. If they start feeling too comfortable they get ideas, so it was our job to remind them that nothing would be easy, nothing would be quick. It’s not that we thought they’d take the first shot they had, just that if they kept getting easy shots, they might take one eventually. To your question, I don’t think the Chinese really wanted to do anything, not if they didn’t have to. It wasn’t until that diver got himself captured scouting Quemoy that things really started to heat up.

Moderator: That’s what got your attention?

RADM Gaumon: The cycle that kicked off caught our attention, yes. At one point after things got really heated but before the shooting started I got a reservist flown out to me on the T.R. to track things. I had China guys, but there’s a difference between an O-4 you send through language school and a War College professor who’s been looking at these things for two decades. Turns out the “confession” video they got out of him only happened because some intel officer posted to Quemoy had a sister who’d married a guy working the defense portfolio for Ma’s campaign staff. He figured he helps the campaign and boom he’s got a brother-in-law high up in the Ministry of National Defense. Crazy, right?

Moderator: And that led to the independence speech?

RADM Gaumon: Yeah. It took about a week of back and forth after Ma’s campaign leaked the video, but the electorate was already pretty pissed at the heavy-handed information operations the Ministry of State Security and Strategic Support Force were running. Then you see a video of a prisoner talking as if your entire country is one big petulant child. The guy is sitting in a prison cell in Taipei for christ’s sake and is here he is talking like he owns the place! It’s not like a lot of the island didn’t already support de jure independence, this asshole just gave them a little push. The next day we get Ma saying “The destiny of Taiwan lies elsewhere” to cheering crowds and Beijing starts playing hardball.

Moderator: You don’t think Ma realized how seriously the PRC would take comments like that?

RADM Gaumon: I… I think the risk was a calculated one to be sure, she wasn’t stupid. Taiwan has had the PRC messing in its affairs for a long time. Yeah this was a big step, but they’d let the election get this far without shooting any missiles into the strait, we’d just done our first port call in decades in Tsoying a year earlier, and the Chinese were still reeling from the construction bubble collapse of 2021. But if there’s a time to take a risk like that, especially in such a tight election, it was then.

Moderator: And they killed her for it.

RADM Gaumon: And didn’t really try to hide it either. I think that’s what made it so galling for the Taiwanese. They knew enough to know they depended on the PRC economically and that wasn’t going to change. The thing with conscription though is that almost everyone has some sense of the military score and frankly it was up in the air at that point, at least when it came to an amphibious invasion. It was a gamble for the PLA to try to cross the strait in force and the ROC knew it. So yeah, the protests went off, Ma’s running mate Wu Yu-Chen got the presidency, and then shit really hit the fan.

RADM Gaumon: We all knew something was coming. We saw missile units moving around and figured the PLA Rocket Force might put a couple more missiles into the strait to send a message coupled with large scale cyber intrusions. Maybe they’d blow up a few targets on Quemoy to soothe their pride? We figured it would be a military demonstration, nothing more. The ROC was already about as ready as it could get short of full mobilization. The fleet was scattered, the air force was already sending out detachments to operate from civilian airports and the highway strips that were being prepped. They almost decided not to do a public inauguration on security grounds, but I suppose there’s only so much a nation’s pride can take. They were done with the PRC pushing them around, Hong Kong had convinced them “one country, two systems” was bullshit and that was that.

Apparently, the call for independence was in Wu’s speech for that day but of course he never got around to making it. Looking back at it, the strike was surprisingly unambitious. I mean it sounds pretty absurd to call more than 600 warheads landing across an entire country in under an hour “unambitious,” but it was pretty straightforward. Missiles, aircraft, one big massed strike followed by heavy air raids, it was big, simple, and got the job done.

Even the cyber-attacks were functional, not stunning. The power grid in Taipei was only down for an hour or so and the air defense communications network was down for less than ten minutes. Of course, that was 10 of the 15 minutes it took for the initial wave of ballistic missiles to hit their targets so it’s not as if their attacks didn’t have an impact, but it certainly wasn’t any “cyber Pearl Harbor” or anything like that.

Really the damage on that first day was done by the PLARF. We all knew they had plenty of short ranged ballistic missiles pointed at Taiwan, but we’d hoped they’d have to use so many to get through the Patriot batteries around the high value targets that there would be fewer to go around the rest of the country. Instead they practically shut down the PAC-3 batteries, knock out the radars with medium-range missiles and they get off two full, practically unimpeded short-range missile salvoes… It’s not that the PLA owned the skies after that. Between the fighters the ROCAF could get up and their medium range air defense systems the Taiwanese were able to shoot down a solid hundred PLAAF aircraft on that first day. That said, those first two salvos ripped the heart out of the Taiwanese Air Force.