Fact: The Proud Boys are Considered a Terrorist Group in Canada 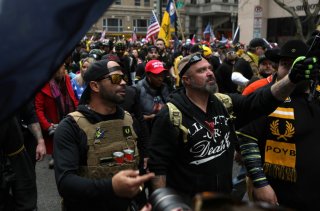 On Feb. 3, Minister of Public Safety Bill Blair in Canada announced that 13 groups had been added to the List of Terrorist Entities. Nine of the groups were jihadist groups. But for many Canadians, the most recognizable group was the Proud Boys, although other groups — particularly Atomwaffen Division and The Base — arguably pose a more virulent threat.

The Proud Boys, founded by Canadian writer Gavin McInnes, rose to prominence as the result of its violent engagement with counter-protesters during the so-called Unite the Right Rally in Charlottesville, Va., in August 2017. As with right-wing extremism more generally, the group, which operates in both Canada and the United States, has continued to rise in stature.

According to Blair, the escalation toward violence shown by the Proud Boys since 2018 was a central factor in their designation as a terrorist group. No one should expect the listing to function as a silver bullet; government officials admit that the designation is unlikely to produce criminal charges anytime soon. But this designation carries with it potentially important implications for the group and its members and supporters.

For the group, among the most significant potential outcomes is freezing, seizing and restraint of property. However, as many contemporary violent extremist groups, including the Proud Boys, operate less as traditional organizations and more as loose confederations of members and supporters, the effects of the listing are more likely to be experienced by these individuals.

Most notably, individuals are legally prohibited from “participating in or contributing to an activity of a terrorist group.” Thus, the proscription goes beyond active engagement in extremism to include support activities such as fundraising and recruiting.

Carrying punishment as indictable offence (and liability to imprisonment for up to 10 years), the terrorist listing is clearly meant to limit the types of support activities that are essential for the sustenance of these groups.

What is less clear is whether the listing will influence Proud Boys members and supporters. For the hardcore members, the most dedicated acolytes, the effect may be minimal; in fact, it is conceivable that they could wear this status as a badge of honour (or proudly, if you like).

But for the bulk of followers, and potential recruits, especially those with what sociologist Jackson Toby once called “stakes in conformity,” the impact may be quite different. It is one thing to be involved with a group that is on the margins of acceptability, it is another to be part of one that has been banned. Such a connection could open one up to a further level of social censure, disapproval or ostracism.

One of the challenges in predicting how individuals affiliated with the Proud Boys will respond to the terrorism label is that we are breaking new ground.

The first two groups to be designated as terrorist entities, Blood & Honour and Combat 18, were largely defunct by the time they were listed. In contrast, the groups added on Feb. 3 are very much active.

In response, some have questioned the need for the list. This argument pays insufficient attention to the seriousness of the current situation. Apart from providing law enforcement with important tools to address a rising threat, designating the Proud Boys as a terrorist group plays a critical role in re-establishing an increasingly opaque distinction between right-wing politics and violent right-wing extremism.

Recent events in the U.S. — five people associated with Proud Boys were arrested and charged with conspiracy for their role in the Jan. 6 Capitol insurrection — represent the culmination of a deliberate process of blurring this line. Former president Trump and many Republican politicians have embraced, or at least failed to dissuade, right-wing extremists, to the point of where it is difficult to clearly demarcate where one ends and the other begins. Although the situation has been less pronounced in Canada, some of the same proclivities are evident here.

Designating the Proud Boys, Atomwaffen Division and The Base as terrorist groups provides a concrete affirmation that their activities unquestionably fall outside the bounds of acceptable political expression.

The listing process carries with it potential dangers that should be addressed. Like other western countries, Canada struggled in the immediate aftermath of 9/11 to create law to address terrorism. Many aspects of the “War on Terror” provide excellent examples of the perils of creating and applying laws and policies during a crisis, and cases where those laws have been arbitrarily or unfairly applied. For example, in the Canadian context, misguided information in the aftermath of 9/11 had led to the torture and mistreatment of certain citizens and permanent residents of Canada.

Perhaps the greatest concern with the listing process is its lack of transparency. While the government ought not be obliged to reveal its case prior to listing, an explanation afterwards of why a particular entity was designated as terrorist would go some way toward alleviating some concerns.

Labelling the Proud Boys as terrorists will not, in and of itself, resolve the growing political chasm that could erode Canada’s social stability. However, it is a necessary element in maintaining the boundaries of reasonable political behaviour.