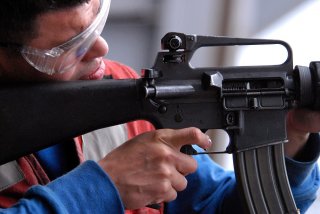 Key Point: This weapon may look really fearsome, but it is a joke. Iranian watchers know this is not the first time something futuristic turned out to be a dud.

The Iranian defense industry is known for making some eye-catching claims and prototypes. The KH-2002 “Khaybar” is one of those, a futuristic-looking bullpup that caught the eye of many foreign watchers. But by most accounts the rifle is terrible in almost every metric. Given that it’s based on the American M16, which is known to be very reliable with the correct ammo and maintenance, how did Iranian industry screw it up?

The KH2002’s with the layout of the rifle itself is questionable. While the layout of the rifle has changed significantly from the initial 2004 version, all versions appear to have an exposed barrel nut, a piece that holds the barrel on an AR-type rifle to the receiver. This nut gets very hot during firing, and having it exposed could easily burn the user.

Ergonomically, the safety or selector don’t appear to be ambidextrous nor positioned in a place where they can be easily activated or deactivated. Early versions of the KH2002 retained an original M16 style magazine release, which works great when the magwell is in front of the pistol grip, but not so well when it is far behind. There is no indication that there’s a Tavor-style magazine catch linkage to allow for easy dropping of the mags with a firing grip.

But these problems are not just theoretical. In 2008 Syrian Army weapons trials, eight out of ten rifles submitted to trials malfunctioned. Following that, interest in the rifle from other countries vanished, and the program was said to have been canceled in 2012. However, a photo of an Iranian soldier with the rifle surfaced in 2014, though no further information is available.

Meanwhile, the Iranian defense industry appears to have gone back to basics, creating standard AR-pattern carbines under the names “Fateh” and “Zolfaqar.” These appear to be relatively conventional compared to the KH2002, though they also have weird design flourishes of their own. But these are unlikely to be adopted as well. The Islamic Republic of Iran Army still uses versions of the H&K G3 as their primary service arm. Conversely, the elite IRGC still prefers the Russian AK-103, probably due to its compatibility with the wide variety of AK mags in the region, while also having less recoil and being more accurate than a standard AKM.