The Failed UN Bid for "Snapback" Sanctions on Iran Shows the U.S. and Europe are Not on the Same Page 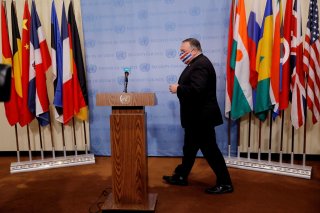 Mike Pompeo was angry. The US secretary of state stood in the UN headquarters in New York on August 20 and proclaimed a new axis of evil between former American allies – the UK, France and Germany – and the Islamic Republic of Iran.

They chose to side with ayatollahs. Their actions endanger the people of Iraq, of Yemen, of Lebanon, of Syria – and indeed, their own citizens as well.

Pompeo’s outburst was prompted by a very bad week for the US in the UN security council. On August 14, only the Dominican Republic supported the Trump Administration’s resolution for an extension of the UN arms embargo on Iran, which is due to expire in October. Russia and China voted no. The other 11 members, including the Europeans singled out by Pompeo, abstained.

Then the following week, 13 of the 15 members of the security council objected to the US attempt to invoke “snapback” sanctions on Tehran.

The “snapback” provision was built into Resolution 2231, which underpinned the Joint Comprehensive Plan of Action (JCPOA), known as the Iran nuclear deal. If any of the parties believes another had violated the terms, then a dispute resolution mechanism can be activated. If there is still no resolution, then UN sanctions on Iran dating from 2010 can be reimposed.

Pompeo claimed that Iran was in violation of the 2015 nuclear deal it had agreed with the 5+1 Powers (US, UK, France, Germany, China and Russia). But everyone else – except for the representative of the Dominican Republic, who said nothing – countered that because the Trump administration withdrew from the agreement in May 2018 it had no standing to demand UN sanctions.

On August 25, Indonesia, which currently holds the presidency of the UN security council, said no further action would be taken to impose snapback sanctions, drawing further ire from the US.

Hoisted by their hard line

When the US withdrew in May 2018 and then imposed unilateral, comprehensive sanctions in November that year, Iran was in compliance with the deal. The International Atomic Energy Agency (IAEA) reported at quarterly intervals that Tehran remained within the agreed limits for production of low-grade uranium.

The Rouhani government, citing the US sanctions and failure to establish a European economic link to bypass them, suspended adherence to some provisions from June 2019. In June, the IAEA confirmed that the Iranians are increasing uranium enrichment to 4.5%, breaking the 3.67% limit set in the 2015 deal. However, Tehran has not returned to its pre-2015 production of 20% uranium.

The Trump administration has no wish to return to what Donald Trump called the “worst deal ever negotiated” in American history. Instead, its strategy of maximum pressure on Tehran sought to condemn Iran’s regional operations in the Persian Gulf and in countries such as Syria, Yemen, Iraq and Lebanon. Then, in early January 2020, a US drone strike assassinated Qassem Soleimani, the head of the Quds Force responsible for Iranian military operations outside the country.

Read more: What next for Iran's proxy network after killing of Qassem Soleimani

Russia, China, the European powers, and almost all other security council members have reached a different conclusion on Iran. They concurred that the deal has to be maintained to prevent further confrontation throughout the Middle East and central Asia. In June, the UK, German and French foreign ministers were blunt in their message to the Trump administration: snapback sanctions would have “serious adverse consequences” in the security council and they could not support it.

Why go it alone?

But this leaves the immediate question: why, given the inevitability of defeat on both the arms embargo and the snapback sanctions, did the Trump administration push so hard and so vociferously – and continue to do so?

A miscalculation of arrogance by Pompeo can’t be ruled out. And, of course, there is Trump’s relative ignorance of US-Iranian relations and the region – even as his camp were shaking a fist of fury, he was talking about the possibility of a high-profile meeting with an Iranian leader.

But career staff in Washington will know that these are fantasies. There is no chance of Trump shaking hands with Iran’s president, Hassan Rouhani, or of the security council agreeing to impose snapback sanctions.

Trump’s circle, having shredded the diplomatic work of the Obama administration, want to box in a future Biden presidency. Their rhetoric about Iranian duplicity, menace and support of “terrorism” seeks to raise the domestic political bar for any resumption of talks, let alone a revised nuclear agreement.

Although it’s not being said openly, almost everyone except Trump’s inner circle is awaiting his departure in January 2021 and the arrival of a Biden administration.

That will not bring a simple return to the status quo before the 2015 deal. A Democratic administration, both because of domestic pressure and concerns over Iranian military plans, will want some revision of terms; so will the Europeans, including over Tehran’s missile programs. Tehran will seek assurances against another unilateral US withdrawal from a deal and for the removal of comprehensive sanctions. But a return to acceptance of mutual interest in a deal, and of discussions of regional matters, will shift the priority to negotiations rather than confrontation.

Still, a second Trump term cannot be ruled out. If Trump is reelected in November, then his administration is likely to pile on more pressure with additional unilateral sanctions, attacks on Iranian infrastructure, and threats to knock out more of Tehran’s commanders. The message will be clear: concede or we will break you.

Tehran is likely to reply: try it. Even as the Trump administration pursues its quest in isolation, that will turn the regional kaleidoscope into more collision and fragmentation, and force Iranians to endure more sacrifice for their leaders’ “resistance” to the US.