FARP: The Air Force's Version of the Pit Stop 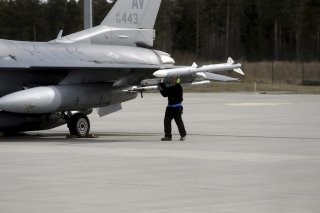 Here’s What You Need to Remember: The FARP concept, while seemingly novel, isn’t a new one.

The cornerstone of FARP, or Forward Arming and Refueling Point, operations is speed. Similar to a Formula 1 pit stop, the goal is to have the aircraft ready to get back into the fight as soon as possible. During a FARP operation, a fighter lands after expending its munitions in the fight and keeps its engines running while support personnel conduct a “hot refuel,” pumping gas into the jet while it taxis. At the same time, others from the team quickly re-arm the aircraft, getting it ready to get right back into the fight.

Recognizing the technical difficulties of FARP operations, the Air Force has created a FARP identifier for qualified Airmen. Further, active FARP units are available only at a few select installations.

The FARP concept, while seemingly novel, isn’t a new one. Special operation forces have been using it for decades now. The elite pilots of the 160th Special Operations Aviation Regiment, nicknamed the “Night Stalkers” depended on the FARP concept to conduct sustained operations in the opening days of the war in Afghanistan. Night Stalkers flying the AH-6 Little Bird went hunting al-Qaida terrorists and Taliban fighters night after night, with FARP operations enabling them to do so.

“There are many benefits to being able to conduct FARP operations, specifically for the pilots involved in Iron Dagger,” an F-35A Lightning II pilot who participated in Operation Iron Dagger, said. “It provides them with the real world experience and training of being able to land anywhere with a suitable runway, rapidly refuel and take off again with the fuel they need to continue to feed the fight. Being able to conduct FARP during Operation Iron Dagger complicates the calculus for our adversaries. FARP showcases our ability to refuel and region the fight from any location."

Both fixed-wing and rotary-wing aircraft can benefit from FARP operations, and the Pentagon has employed or tested the concept on the F-22 Raptor, F-35 Joint Strike Fighter, A-10 Thunderbolt II, AH-1Z Viper, F-15C, MQ-9 Reaper, AH-6 Little Bird, and CV-22 Osprey, among other platforms.

ACE and FARP are two capabilities that enable Air Force units to be strategically predictable and operationally unpredictable.

Stavros Atlamazoglou: Greek Army veteran (National service with 575th Marines Battalion and Army HQ). Johns Hopkins University. You will usually find him on the top of a mountain admiring the view and wondering how he got there.