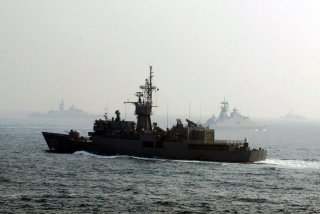 Here's What You Need to Remember: Military modernization has gained a new urgency under President Tsai Ing-wen, who has emphasized the importance of building up Taiwan’s domestic defense industry. These efforts are spurred in no small part by the Chinese Communist Party’s (CCP’s) increasing impatience with “resolving the Taiwan question.”

Taiwan is dramatically expanding its defense budget in the face of mounting military pressure from China.

A proposal unveiled by Taiwan’s cabinet on Thursday calls for the allocation of an additional $8.7 billion in defense spending over the next five years. Though the proposal is still pending formal approval from Taiwan’s parliament, it will likely be greenlighted given the ruling Democratic Progressive Party’s majority in the legislature. This sum will be in addition to the $16.89 billion that already comprises Taiwan’s defense budget for fiscal year 2022. "In the face of severe threats from the enemy, the nation's military is actively engaged in military building and preparation work, and it is urgent to obtain mature and rapid mass production weapons and equipment in a short period of time," said Taiwan’s Defense Ministry in an earlier statement. According to Reuters, the proposal preamble highlights China’s uptick in military spending and belligerent regional behavior. The proposal calls for a quick build-up of “asymmetric” capabilities to “effectively deter a war.”

The extra funding will go, in large part, toward procuring new military hardware.  Deputy Defense Minister Wang Shin-lung told reporters that all of the new arms in question will be produced domestically.

Taiwan seeks to develop and produce precision-guided missiles, as well as "high-performance" ships. Taipei is likewise investing in a homegrown diesel-powered attack submarine program, having constructed its first dedicated submarine production facility in 2020.  The first such submarine is slated for completion in 2024. The term “homegrown” does not necessarily mean that a product is fully domestically sourced—as a case in point, Taiwan’s burgeoning submarine industry has previously benefited from U.S. technology transfers. Earlier this summer, Taiwan’s Navy commissioned the new Ta Chiang “carrier-killer” stealth corvette. An improved model from the Tuo-Chiang class, the Ta Chiang boasts the ship-launched version of Taiwan’s Sky Sword II air-to-air guided missile, as well as the homegrown Hsiung Feng II and III anti-ship missiles.

Military modernization has gained a new urgency under President Tsai Ing-wen, who has emphasized the importance of building up Taiwan’s domestic defense industry. These efforts are spurred in no small part by the Chinese Communist Party’s (CCP’s) increasing impatience with “resolving the Taiwan question.” In a speech given at the CCP’s centenary celebration, CCP General Secretary Xi Jinping proclaimed that “we must take resolute action to utterly defeat any attempt toward ‘Taiwan independence,’ and work together to create a bright future for national rejuvenation.” Beijing’s emerging approach was encapsulated earlier this year by Chinese defense ministry spokesman Wu Qian: "We warn those 'Taiwan independence' elements—those who play with fire will burn themselves, and Taiwan independence means war."