Feast Your Eyes on the Worst Tank Of All Time: Germany’s A7V 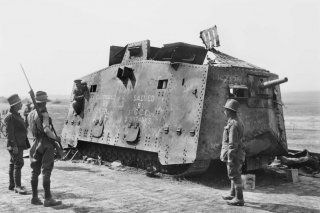 Here's What You Need To Remember: While it’s impossible to know how well the LK IIs might have performed, they would have likely been a better use of resources than Germany’s failed U-boat campaign, which sucked up scarce steel and fuel and — disastrously for Berlin— triggered an American intervention.

When the German army’s first domestically-built tanks rolled into combat in March 1918 at St. Quentin Canal, the armored beasts looked considerably different from British and French designs — and most post-war tanks to follow.

The A7V was a monster, stuffed with 18 crew members and brimming with six machine guns and a 57-millimeter cannon. While certainly terrifying to Allied troops, it was expensive, slow, mechanically troubled and too limited in number to affect the outcome of the war.

It was not the worst tank ever, but not exactly good, either. There’s a reason why the bulk of Germany’s World War I tank force was comprised of captured — and superior — French and British designs.

Perhaps worst of all, the A7V’s armored overhang and top-heavy design could get it easily entangled in the broken maze of trenches across the Western Front. Tanks need numbers and decent mobility to be effective, but the German high command envisioned them as glorified, lumbering pillboxes.

There was another way. German tank designers had better plans that, while neglected at the time, were an improvement over the clunky A7V.

As the A7Vs headed to war, the tank’s designer Joseph Vollmer worked a light, three-crewed design called the Leichter Kampfwagen, or light combat car. Basically, it was an armored tractor with a single, 7.92-millimeter machine gun.

The Germans only built two of them, and they never saw combat.

But combat wasn’t the point, as the design served as a prototype for the follow-up Leichter Kampfwagen II — or LK II. This upgraded version weighed nearly nine tons due to its additional armor, around two tons more than its predecessor. A rearward, four-cylinder, 60-horsepower engine allowed speeds of 10 miles per hour.

There were few outward differences between the two tanks. The biggest change in the LK II was the addition of a 37-millimeter cannon in the rotating, rear turret.

Conceptually, the LK prototypes were similar in kind to the French Renault FT, arguably the most successful tank of World War I. And like the Renault, the Germans planned to manufacture hundreds of LK IIs.

While it’s impossible to know how well the LK IIs might have performed, they would have likely been a better use of resources than Germany’s failed U-boat campaign, which sucked up scarce steel and fuel and — disastrously for Berlin— triggered an American intervention.

At the least, large numbers of LK IIs might’ve stood a chance of performing more effectively than the handful of clumsy A7Vs, which did not.

“The best way to make use of these scanty resources would have been to concentrate them as a combined force on some point where we needed to gain a rapid decision, and where the ground was reasonably favorable for the movement of tanks,” German general and armored warfare theorist Heinz Guderian wrote in his 1937 book Achtung-Panzer!

“But this was too much for the high command to swallow.”

In any case, Vollmer’s lean designs came too little, too late. The Central Powers’ few battlefield experiments with tanks, while at times successful in isolated cases, were strategically useless. Allied advances and a cascading collapse of German morale forced an end to the conflict in November 1918.

And like the LK I, Vollmer only produced two LK IIs before the war ended.

Yet the LK II had a life after World War I.

Following the Treaty of Versailles, which banned Germany from building tanks, Berlin secretly sold 10 LK IIs to neutral Sweden, shipping them in pieces for later assembly. Sweden rechristened the machines as Stridsvagn m/21s, gave them machine guns, upgraded their engines and components and handed them over to the army.

The clunky A7Vs, on the other hand, were almost all destroyed during the war or captured and scrapped. Right-wing Freikorps paramilitaries built a handful of similar bespoke monsters to crush the 1919 Spartacist uprising in Berlin … and that was it.

Only one A7V, Mephisto, survives to the present day as a museum piece.

The LK II still never saw combat and remains largely forgotten. Nevertheless, it was probably more significant, over the longer term, than the A7V.

During the interwar period, Guderian — one of the 20th century’s most influential military theorists — spent years studying and refining his ideas regarding tank warfare, which erupted on a terrifying scale in 1939. Ten years before the outbreak of World War II, Guderian encountered real tanks for the first time … during a trip to Sweden.