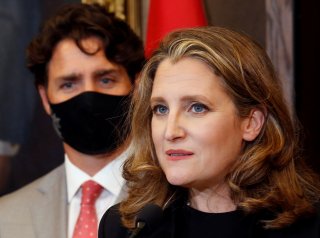 What a groundbreaking week this has been in North America, with great excitement about two appointments that shatter glass ceilings.

In the United States, Senator Kamala Harris, former California attorney general, has just been nominated as the running mate for 77-year-old Democratic presidential nominee Joe Biden. Harris is the third woman be nominated for such a position, and as the daughter of Indian and Jamaican parents, she is the first racialized woman.

Also this week, Chrystia Freeland has been named as the first woman finance minister in Canada. I had dreamt that I would be the one breaking through that particular glass ceiling when I was the official opposition finance critic for the NDP. It was not to be, but I am delighted for Freeland. There have been women who’ve run the finances provincially in Canada, but never federally, until now. These changes offer hope to girls and young women everywhere.

But change takes such an awfully long time. As we look around the world there are only 16 elected world leaders who are women — about 10 per cent. Neither Canada nor the U.S. has ever had a woman elected to the very top position. Corporate board rooms don’t fare much better: only 17 per cent of CEOs globally are women.

Both Harris and Freeland assume their positions in the midst of troubling times, leading some to ask why does it take a crisis to promote women? And the answer seems to be because they perform very well.

The current U.S. administration has mismanaged its response to the COVID-19 pandemic, which has resulted in more cases and deaths than any other country. The Black Lives Matter protests have challenged the racialized impact of policing and the continued dominance of white privilege in political, corporate, economic and social life. In the U.S., there are fears that their very democracy is at risk due to the actions of President Trump.

Harris breathes life, generational change, energy and excitement into the Democratic campaign to win back the presidency. She should motivate progressive, young, racialized and women voters to get out and unseat the current president. And while her nomination in this election is ground-breaking, if she can make it to the next level, to the presidency, she may well help the United States fully recover from its bout of ill temper and instability.

Here, in Canada, how unfortunate that the Liberal government is mired in its third major ethics scandal. Having been found in violation of ethics rules twice before, the prime minister was desperate to change the political channel, but just when the government released thousands of documents about the WE scandal, the former finance minister, Bill Morneau, resigned. Freeland, a former journalist and author, then replaced him; she remains as the deputy prime minister.

Freeland has demonstrated her negotiating chops in renewing the NAFTA agreement and as the point person on intergovernmental affairs. She is talented, competent and experienced. She can do the finance job, and many are seeing her as a future prime minister — so it’s sad that she is seen by some as a political fig leaf.

Send in the Cavalry

Without question, both Harris and Freeland are strong, accomplished and up to their new jobs. Perhaps this is the best time to call in the women to fix so much of what is wrong with politics. Some argue that if we compare the record of women leaders during the pandemic, these women perform very well, especially when compared with strongman leaders.

Even with a gender-equal cabinet, Canada ranks 61st in the world for the representation of women in national parliaments. This is shameful and we need to elect more women MPs who represent the broad diversity of Canada.

But history is not destiny.

Looking around the world, there is a new generation of women leaders such as Jacinda Ardern in New Zealand and Sanna Marin and her coalition of five young women leaders in Finland, who have been providing excellent leadership.

Whether in Canada, the U.S., New Zealand or Finland, we expect that this next generation will not only aspire to power for themselves, but they will open the doors of power to better representation. Enough of shattering glass ceilings: just equality please.