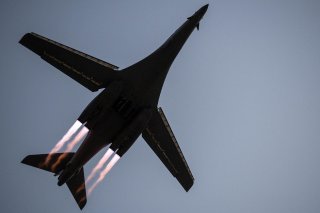 DF-26B ballistic missiles split the sky with their hypersonic screams. Guam Killers rained down and Andersen Air Force Base burned. Greasy, black smoke, illuminated by bright flashes of primary detonations, billowed violently into the sky. War was loud, very loud, thought Lieutenant Andrew Cohen as he strapped into the right seat of Bone Daddy, a B-1B Sea Control Bomber. He was first to the aircraft and had hit the alert button at the base of nose gear to start the engines before climbing up to the cockpit.

Cohen opened his NATOPS pocket checklist. His hands shook and he couldn’t stop them. This wasn’t a fight. This was straight up murder from the sky and any second now a thousand-pound high-explosive warhead was going to detonate fifty feet above him and the overpressure would flatten him to a thin paste of jelly before his synapses could fire. Patriot and THAAD missiles arced skyward, leading long vaporous contrails. Bursts of light illuminated the high cumulus clouds gathering in the early dawn.

He stared for several impossibly long seconds at his NATOPS checklist as if it was written in some strange, foreign language. An explosion rocked his aircraft and bits of Andersen Air Force base pelted the fuselage.

“Sir, no one else is coming. They are all dead.”

“Okay.” Cohen advanced the throttles and the four F101 engines spooled up from idle. The aircraft lurched forward and he steered it off the alert strip onto runway Six Left. “Get up here and strap in.”

Lenihan sat and strapped himself into the left seat as the aircraft rolled. On the runway, Cohen advanced the throttles to their stops, full afterburner. Bone Daddy surged as all four afterburners lit.

Debris rained down. Pieces of runway. Pieces of buildings. Pieces of people. The nose dropped off a buckled slab of upheaved runway. Cohen thought of Air France’s Concorde trailing fire when kicked-up debris ruptured a fuel cell. Airspeed built and the nose broke ground. The Air Force’s B-21 Raider hangars exploded and rivers of burning JP-8 fuel flowed across the runway.

The main mounts slipped free and he sucked the gear up, flying through fire. He pushed the nose over for airspeed. 360 knots. Wings swept back 25 degrees. The jet was heavy with 16 AGM-158D Long Range Anti-Ship missiles in the mid and aft bays and an auxiliary fuel tank in the forward.

The smartest thing Cohen could do was get away from ground zero.

The ground plummeted away as he escaped over Pati Point, the cliffs at the end of the runway. He leveled at 350 feet, 540 knots, wings swept full aft, above a sea slick with morning light. He banked left and rolled out heading 360. He didn’t really know why, it just made intuitive sense. His heart pounded. He just took off without a plan. He locked eyes with Lenihan and saw his own terror reflected back.

An immense flash of light lit up the area behind the aircraft.

“Did they nuke us?” asked Lenihan.

Despite its capabilities, the Air Force didn’t want the B-1B. No matter how sexy a Cold War killer it was, without stealth, its ability to penetrate highly contested airspace came under increasing doubt, besides it was just a bit too long in the tooth, a money sponge sucking up resources for new hardware. The Air Force didn’t want the Navy to have it either. Bombing was firmly within the realm of Air Force mission sets and who needed the competition; besides, the Navy had their P-8 Poseidons to prowl the oceans.

Oddly enough, the Navy was in violent agreement and did not wish to take custody of the aging platform. Not only were they expensive, but philosophically, operating the B-1B was de facto proof that aircraft carriers were vulnerable to shore-based bombers firing standoff weapons, and the Air Force did not need any help making that argument. But a shipbuilding program crippled by persistent economic recession, a suspicious shipyard fire that scrapped the USS Abraham Lincoln, and the cancelation of USS Doris Miller meant that the Navy had a power projection problem in the Pacific ocean.

Boeing lobbyists, Congress, and a dusted-off RAND study forced the matter and twelve B-1B Lancers were regenerated from Davis-Monthan’s Type 1000 storage and bailed to the U.S. Navy. Six were based in Japan, six in Guam.

Only one would make it to the fight.

“What are we doing?” asked Lenihan.

“I don’t know yet.” Cohen had a digital copy of yesterday’s intel brief on his secure tablet with the last known positions of the three Chinese Carrier Strike Groups. Very unusual for all three to be at sea at the same time. The Chinese had claimed it was an exercise.

He rotated through Guam center, tower, and ground frequencies. Dead air. The frequencies for Guam International Airport were also quiet. No sense in taking out one airfield and leaving the other.

“Lenny, you are gonna have to run both defense and offense. Load up the ESM library so we can see who is out here with us.”

“We’re only half a crew and we don’t have orders,” said Lenihan.

Lenihan looked hesitant but finally said, “I’m on it.” He left the cockpit to take his position at the Offensive Weapon Systems Operator’s station behind the cockpit.

Calmer now, Cohen took the time to organize his cockpit and back himself up with his NATOPS checklist. What did he know?

GPS and SATCOM systems were down. Earth’s orbit was probably a tumbling satellite graveyard. No way to get confirmation or authorization. Bone Daddy’s inertial navigation system was upgraded with the new MAGNAV system so he knew where he was in the world. He flew undamaged over a blue Pacific Ocean darted with sunlight after a horrific ballistic missile attack that destroyed Andersen. With the aux tank in the forward bay, he had nine hours of fuel, enough for Taiwan and back. Bone Daddy was alone and loaded for a sea denial mission.

Time to deny the sea.

Cohen thought of his wife and how scared she must be. If she was still alive. He went there, indulging his inner darkness. How screwed up the world must be for her to be a casualty before him. “Find me something Chinese and military to shoot at.”

Airman Morales’s head throbbed and blood ran into his eyes from a gash across his forehead. He felt scalped. He scooped pulverized concrete debris with the front loader’s bucket and as it rolled forward a blackened human torso tumbled into view. Intestines spooled out from the ruptured body and the remains fell out of sight. Between the broken-up dead and the toxic smoke, the smell was atrocious, and with the tropical heat, the stench would only get worse. He stopped and vomited between his legs.

“What the hell are you doing?” yelled Master Sergeant Grady.

“Master Sergeant, there’s people in the…”

“No. We don’t have time. Fill those holes in the runway. Just do it.”

Morales nodded. If a man with third degree burns and half a uniform gave you orders, you followed. Besides, he was the only one within sight that had his shit together.

“There is a bird out there, Morales. It needs to come home,” explained the Master Sergeant.

How could you tell? thought Morales. Cratered runways. Flattened buildings. Blasted aircraft. Fires burned everywhere and no one was putting them out. It was like a malignant god had reached down and stirred the Earth. Everything was chaos except for the Master Sergeant. Morales wiped his sour mouth and nodded in affirmation. His head pounded. Smoke stung his eyes.

Nothing easier than filling holes and there were more than enough to keep him busy.

The front loader’s engine drowned out the screams of the nearly dead.

“I got something. Someone broke EMCON,” said Lenihan. “A single hit on a Type 348 fire control radar associated with 37 millimeter close-in weapon system. Mounted on multiple classes of Chinese warships. Bears 002, indefinite range. It lasted about 15 seconds.”

“Okay turning to. Keep me updated.” He flew hands on at 1500 feet above the Pacific. BARALT hold on. RADALT hold off. Unlikely that radar altimeter emissions would travel far enough for detection, but before a few hours ago, missiles raining down on Guam were also considered unlikely. He was much calmer. The routine demands of flying focused his mind. Let the training win.