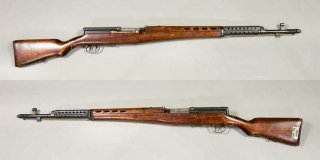 Here's What You Need To Remember: In the end, SVTs saw considerable action on the Eastern Front of World War II, even if they were overshadowed by other mass-produced weapons. Although its capabilities were not a perfect fit for the Soviet World War II machine, they offered a foretaste of its later development of automatic weapons.

The United States was the first major power to adopt a semi-automatic service rifle during World War II, the M1 Garand. While most World War II infantrymen had to pull back a heavy bolt after each shot of their bolt-action rifles, a GI could expend a Garand’s clip as fast as he could pull the trigger.

However, the Soviet Union attempted to upgrade its riflemen to SVT semi-automatic (or “Self-Loading”) rifles before the United States. However, the plan fell through due to two intersecting problems: the first was a massive Nazi invasion. The second was that the SVT was expensive to produce, and required more training to maintain and operate.

In the 1930s, Stalin was keen on introducing semi- or fully automatic rifles into the Red Army. After first pursuing the AVS-36 automatic rifle which proved disappointing, in 1938 Stalin personally selected a design by Soviet small arms designer Fedor Tokarev, better known for his iconic TT-33 service pistol. Tokarev’s SVT-38 rifle was gas-operated: after firing a 7.62x54mm bullet, gas pushes a short-stroke piston located above the barrel, re-cocking the weapon with another round.

However, the SVT-38 received poor marks due to excessive recoil after being combat-tested in the Winter War of 1939–40 against Finnish troops. (The Finns captured 4,000 of them!) Production of the SVT-38 was cut off in 1940 with just 150,000 built. A more robust SVT-40 was rushed into service with a muzzle break added to compensate for recoil.

The Red Army planned to replace at least one-third of its Mosin-Nagant bolt action rifles with SVTs built by the Tula Arsenal. These were issued mostly to sergeants and sharpshooters, along with detachable bayonets and a pouch with two additional magazines. One million had been produced by 1941 when Hitler unleashed his cataclysmic invasion of Russia.

Meanwhile, facing a shortage of small arms to equip its expanding conscript army, the Soviet Union refocused on whatever it could mass produce in the greatest quantity. The SVTs cost more than a Degtyaryov DP light machine gun, and ten times more than a bolt-action rifle. Worse, unlike many iconic Soviet weapons, the SVT was relatively complicated to disassemble and maintain.

Therefore, Mosin-Nagant model 1891 rifles and PPsH-41 submachine guns were mass-produced by the million, while just two factories at Izhevsk and Podolsk were left building SVTs. Though submachine guns were ineffective beyond 150 to 200 meters, it was easier to hastily train conscripts to hose enemies with automatic fire in close quarter combat.

The Soviet Union still managed to churn out 1.6 million of the self-loading rifles by the time production ended in 1945, and SVTs feature in numerous photos of the war on the Eastern Front. Soviet Naval Infantry made frequent use of the weapons—some photos suggest entire squads were so equipped. This could have been due to their superior training, allowing them to make better use of the SVT’s capabilities.

Soviet snipers such as the legendary Lyudmila Pavlichenko used SVT-40s with great success—“Lady Death,” for example, is credited with killing 309 Axis soldiers before she was badly wounded by mortar fire during the siege of Sevastopol. (You can see a colorized photo of Pavlichenko with an SVT-40 here.) However, production of the sniper variant was discontinued in 1942.

Despite being adopted on a more limited scale than the six million M1 Garands built for the U.S. military, the SVT rifle holds its own in comparison. At 8.5 pounds, it was lighter than the eleven-pound Garand, and used a ten-round magazine which could be locked into place and more easily removed, compared to the American rifle’s sometimes troublesome eight-round clips. On the other hand, the SVT had inferior sights, was 11 percent longer at forty-eight inches, and was slightly less accurate, exhibiting looser shot grouping. This article offers a detailed comparison of the two rifles’ strengths and weaknesses.

After World War II, the SVT-40 was swiftly withdrawn from military service, though there are accounts some were used in the Cuban Revolution. However, the SVT was succeeded by the semi-automatic SKS carbine, which was widely employed by Communist revolutionaries throughout Africa, Asia and South America.