To Fight Thanos, the Avengers Needed a Better Leader Than Capt. America 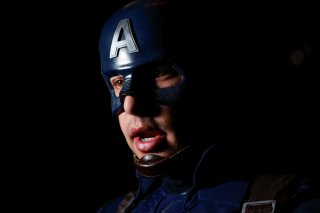 Here's What You Need to Remember: While the tactical challenge facing Captain Rogers was a difficult one, he went to seemingly every length to make it harder. While the unexpected arrival of Task Force Thor did ultimately tip the balance in his favour, that does not excuse the manifold failures found throughout his conduct of the battle.

The world is blessed that Steve Rogers never made it past captain. The Battle of Wakanda in Avengers: Infinity War is a master class in how not to use an infantry battalion. However, from his failure, we can extract some fundamental lessons:

To set the stage – Captain Rogers and his host nation ally Black Panther positioned a Wakandan infantry battalion in close order on the plains outside Benin Zana, the capital city of Wakanda. While they were transported to the battlefield by vehicle, these craft were sent away. This dramatically cut down on the tactical mobility of the overall force and forced an engagement at that location. Given the enemy had superior numbers, this complete disregard of manoeuvre was a critical mistake.

It is true that the transport craft were unarmoured and open-topped. If fighting an adversary with strong anti-armour or indirect fire capabilities, sending them away would be reasonable. However, the Thanosian forces lacked this entirely. Their troops were incapable of using ranged weapons, or indeed, higher brain functions. They traveled on foot and bit the opposition to death.

Captain Roger’s disregard for vehicles is perhaps excusable as being on brand for a career light infantry officer. However, his next sin was far more grievous.

Captain Rogers failed to keep any sort of reserve force back from the fighting. Instead, he committed them all into one action. The only unit not so engaged was Scarlet Witch, who was the last line of defence protecting Benin Zana. However, re-tasking a unit from a critical role is not the same as having a dedicated reserve force.

This criticism over a lack of a reserve is not just an angry insistence on proper procedure. It had a real tactical cost. Wakanda was surrounded by a shield which killed the majority of the enemy forces trying to penetrate it. However, some did get through, necessitating a conventional ground force behind the shield. The Avengers decided to open the shield and invite a decisive encounter for fear that the enemy would use their superior numbers to send a flanking force to penetrate the shield in another area while fixing the infantry battalion in their original position.

If they had had a reserve – or even (gasp) available vehicles – then they could have repositioned troops to deal with any flanking threats without sacrificing the first position. Instead, the lack of a reserve necessitated giving up their biggest defensive advantage.

Captain Rogers and his host nation allies decided against this policy. Instead, when the gap was opened, they ordered their battalion to charge into melee combat. While capable close combatants, the Wakandan troops were desperately outnumbered. Breaking formation and fighting as individuals discarded their advantage in firepower and coordination. Moreover, it entirely surrendered any mobility they did have. Luckily for them, the Thanosians committed themselves entirely to the decisive battle. If they had flanked as originally planned, then the entire Avengers-Wakandan force would have been defeated very swiftly.

While lacking in indirect fires, the Wakandan force did possess a flight of multirole gunships, along with the heavily armed War Machine, and Falcon. However, these aviation assets were poorly coordinated. War Machine mounted a bombing run against the attacking enemy force – but only those within the shield, achieving little effect. If he had been directed to attack those outside the shield, he would have had significantly more impact. He later did provide air to ground fires against the shield gap, but this was not coordinated. Therefore, he only began firing after the shield had been open for a over a minute. This allowed a large hostile force to move through.

This applies to the gunships as well. Instead of firing on the enemy main body, they were initially absent and later attacked the – by then empty – enemy dropships. This failure to coordinate fires with the ground component commander’s intent deprived the Wakandan ground troops of a key advantage over the enemy. Moreover, the commitment of the entire Wakandan force to melee combat complicated the close air support task immensely.

The Battle of Wakanda is a short and approachable case study in what not to do with an infantry battalion. While the tactical challenge facing Captain Rogers was a difficult one, he went to seemingly every length to make it harder. While the unexpected arrival of Task Force Thor did ultimately tip the balance in his favour, that does not excuse the manifold failures found throughout his conduct of the battle.

I shudder to think what his OER will look like. If he has any sense, so should he.

Editor’s note: Luckily for Captain Rogers’ career, his rater and senior rater are slightly fragmented at the time of writing this. His inability to integrate natural and man-made obstacles to create an engagement area, combined with his inability to mass fires at the point of penetration, surely stands as a black mark against his otherwise excellent record. While no one can doubt Captain Rogers’ physical and personal courage, his ability to manage multidomain battle leaves much to be desired.