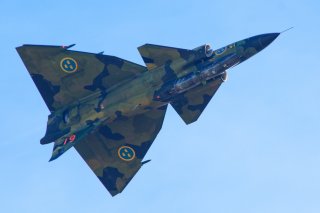 Here's What You Need to Remember: The fighter was a true warbird, and was armed with a 30mm Oerlikon KCA cannon, and was also fitted with six underwing/under-fuselage hardpoints, which could be used to carry air-to-air and air-to-surface ordnance.

Throughout the Cold War, the Scandinavian nation of Sweden maintained a strict policy of neutrality yet still prepared for a possible war with the Soviet Union.

To help facilitate the policy, Stockholm also adhered to a strict policy of indigenous design, development, and production of its frontline military equipment – notably aircraft. At the end of the 1960s, Sweden began to develop a new multirole fighter that was designed from the outset to be "battlefield friendly." In this case, the aircraft needed to be able to take off from short runways and in a pinch use Sweden's large networks of highways and remote roads. Moreover, the new fighter needed to be easy to refuel and rearm by conscript-level troops.

The result was the Saab S37 Viggen or "Thunderbolt," a single-seat, single-engine fighter that featured a low double delta wing with two canards equipped with flaps. Designed to replace the aging Saab J35 Draken, the Viggen's first flight took place in 1967 and it entered service with the Swedish Air Force in 1971. It was also the first canard-designed aircraft to be mass-produced, and at its introduction, it was the most advanced fighter jet in Europe and remained so until the Panavia Tornado entered service in 1981.

Several distinct variants of the Viggen were produced and these include the AJ37, which was designed to fulfill a strike fighter role; the aerial reconnaissance SF37; the SH37 maritime patrol version; a two-seat trainer SK37 version; and the JA37 all-weather fighter-interceptor. From 1970 to 1990 some 329 of the Viggens were produced, and Sweden was the only operator. In November 2006, the platform was retired.

The Viggen was powered by a Volvo RM 8 turbofan, which was, in essence, a license-built version of the Pratt & Whitney JT8D engine that was used to power commercial airliners in the 1960s. An afterburner was added to the S37, while the airframe also featured a thrust-reverser, which could be used during landings. It was the first aircraft to feature both an afterburner and thrust-reverser – a feature later seen in the Tornado and the Concorde commercial airliner. With its limited short take-off and landing (STOL) abilities, the Viggen could operate from airstrips that were around 500 meters.

Designed as a single-seat aircraft, the Viggen featured advanced avionics, which included a central computer and heads-up display to replace a human navigator. This included the CK 37 (centralkalylator 37), the world's first airborne computer to utilize integrated circuits.

The fighter was a true warbird, and was armed with a 30mm Oerlikon KCA cannon, and was also fitted with six underwing/under-fuselage hardpoints, which could be used to carry air-to-air and air-to-surface ordnance. Typical weapons loaded include AIM-9 Sidewinders, AIM-120 AMRAAM and RB71 Skyflash missiles.

While Stockholm originally planned to produce 800 of the Viggen, the order was cut short due to costs and the fact that the aircraft wasn't offered for export, despite it being proposed as a replacement for NATO's F-104 Starfighter. Saab had initially marketed the aircraft around the world, but Swedish export laws were an issue – while the United States also blocked a potential sale to India by not granting an export license for the engine, as it used American technology, thus giving Washington a say.

While the Viggen was never used in combat, this aircraft would have been like a thunderbolt from the heavens had any pilot of the Viggen taken to the skies in anger.