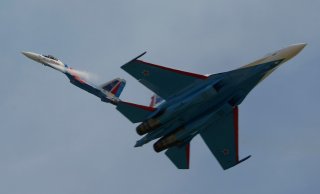 Here's What You Need to Remember: While the Raptor’s superior performance can make up for a lot of the deficit, close-in, the lack of a high off-boresight missile is a serious deficiency—which the U.S. Air Force hopes to address in the coming years

For Russia, selecting the Su-30SM for the Syrian operation is a logical choice. The aircraft can carry a hefty payload and it has excellent range. Moreover, it offers the flexibility to carry out air-to-air and air-to-ground missions. That means it doesn’t need a separate fighter escort. Further, the aircraft has a second crew member, which is helpful for complex missions. That’s why the U.S. Air Force’s F-15E Strike Eagle and the U.S. Navy’s F/A-18F Super Hornet, which are in many respects the Su-30SM’s direct analogues, have two aviators onboard.

The only wild card is if by some chance there was a visual range confrontation between U.S. and Russian jets that turned into a combat situation. In a visual range dogfight, the Su-30 has a chance against the F-22. The Flanker has R-73 high off-boresight missiles while the Raptor is stuck with the antiquated AIM-9M version of the Sidewinder missile—for now. While the Raptor’s superior performance can make up for a lot of the deficit, close-in, the lack of a high off-foresight missile is a serious deficiency—which the U.S. Air Force hopes to address in the coming years.

This first appeared in 2014. It is being reposted due to reader interest.