A Film By the U.S. Navy Revealed Plans to Use Chemical Weapons During the Cold War 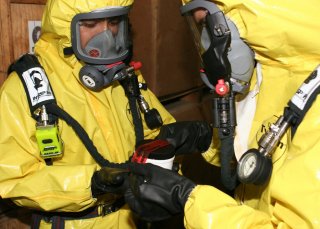 During the early years of the Cold War, the Pentagon heavily prepared to use — and defend against — new and improved poison and germ weapons.

Now we have detailed look at those plans from a newly declassified 1952 U.S. Navy training film. Earlier in October 2015, the independent website GovernmentAttic.org posted an electronic copy of the footage. A private individual had requested the footage 15 years ago via the Freedom of Information Act.

“Biological and chemical warfare have two principle objectives,” the film’s narrator says, “to reduce food by destroying his crops and his food-producing farm animals and to incapacitate the enemy’s armed forces and that portion of his human population that directly supports them.”

This clinical and disturbing description of wreaking chemical and biological death on an opponent is accompanied by images of fields, pigs and marching Soviet troops.

The U.S. Naval Photographic Center produced the film to explain how the military planned to deliver deadly chemicals and diseases, and protect its own sailors from similar attacks. The narrator describes the results of experiments that — if they had involved real chemical weapons — would have resulted in the deaths of thousands of people. The film also details equipment designed to spray toxic particles from airplanes, ships, submarines and more.

The Pentagon put the U.S. Army in charge of cooking up the specific agents and producing them in sufficient quantities, the narrator notes. Originally formed as the Chemical Warfare Service in 1918 during World War I, the Army’s Chemical Corps researched dozens of possible payloads.

The ground combat branch already had decades of experience with gases like mustard and phosgene that burn the skin and attack the lungs. The United States and the Soviet Union — as well as other allied powers on both sides — appropriated work Nazi Germany had done on organophosphates that strike the central nervous system and prevent a person’s brain from communicating properly with their vital organs.

The same year the Navy produced the film, scientists in the United Kingdom invented a new nerve agent codenamed Purple Possum. After learning of the weapon, the U.S. Army started producing the substance with its own moniker, VX. On top of that, the Chemical Corps explored the possibility of weaponizing various bacteria, viruses and toxins. Pentagon experiments included work on anthrax, bubonic plague, smallpox and ricin, among others.

Lastly, as alluded to in the Navy film’s introduction, the Army considered various chemical and biological agents that could specifically kill crops and livestock. As a result, the Pentagon had an advanced defoliation program well before it sprayed gallons of Agent Orange over Vietnamese jungles.

With the Army in charge of these terrifying chemicals, the Navy focused its efforts on the delivery systems. The film describes weapons dispersed from ships, dropped or sprayed from airplanes or released by submarines.

According to the narrator, the Navy conducted its first ship-borne tests two years earlier in 1950. “A rather crude spraying system was installed on a mine layer, which … secretly cruised off California and sprayed some 50 gallons of biological stimulant along a track two-to-five miles off shore,” the narrator says.

The Pentagon regularly used non-threatening bacteria or spores to secretly test how far a real germ weapon would spread. In this experiment, as in the case with chemical and biological weapons in general, weather patterns and the terrain largely dictated where the particles went.

During the California test, technicians used special collectors to determine that the spray covered some 48 square miles of total area. “Had an infectious agent been used in the spray, there might have been 210,000 casualties,” the narrator says.

In April 1952, the minesweeper USS Tercel sprayed more simulated toxins along the coasts of North Carolina, South Carolina and Georgia. “The rather flat terrain would be favorable to wide dispersion of wind-borne particles,” the narrator says in the film.

Tercel sprayed 250 pounds of zinc cadmium sulfide during an eight-hour voyage along some 100 miles of coastline. Evaluators later found evidence of the fluorescent material across 20,000 square miles spread over all three states.

But surface ships such as the Tercel would be vulnerable to attack during an actual war. Recognizing this vulnerability, the Navy planned to mount sprayers on submarines for actual operations.

After reaching periscope depth, the submarines would — as the concept went — vent their deadly payloads into the atmosphere. If everything went according to plan, the vessels would then submerge and escape without anyone on land knowing the attack had even happened … until it was too late.

The Navy also worked on underwater chemical and biological mines. A sub would lay these devices along the ocean floor and then leave the area. After a predetermined time had passed, the mine would float to the surface. A tube would then pop out of the top and release its gas or germs. Aircraft could carry the same weapons and drop them into lakes and rivers further inland.

Alternatively, an airplane with a giant spray tank could do the job. At the time, bombs loaded with noxious chemicals were hardly new, but spray tanks would be more effective and accurate for seeding large amounts of toxic agents.

Some of the early concepts involved modified drop tanks with pumps and nozzles. This meant that any plane that could carry the original fuel tanks could also carry the spray gear loaded with poison gases, biological particles or defoliants. Nearly all of the Navy’s carrier-based propeller- and jet-engine fighters and bombers of the day — including the F4U Corsair, F7F Tigercat, AD Skyraider, F2H Banshee and F9F Panther — could lug this equipment.

Larger land-based patrol aircraft, such as the P2V Neptune, could carry more traditional crop-dusting spray gear under their wings. Further, the Navy planned to put the smaller spray units on its new Gorgon V cruise missiles.

One of the Pentagon’s first long-range weapons, the radio-guided Gorgon V had a range of some 30 miles and flew close to the speed of sound. These qualities meant that Naval aviators could lob the weapons well away from an enemy’s anti-aircraft defenses.

The sailing branch planned to turn the more potent Regulus missile into a chemical weapon, as well. Slower, but with a maximum range of 500 miles and able to be launched from a surfaced submarine, the Regulus easily put the older Gorgons to shame.

And there were the chemical commandos. The Navy cooked up a small tank for its Underwater Demolition Teams, the predecessors of today’s elite SEALs. The Navy envisioned dropping these troops in the water near a shoreline, who would then creep up to the beach and prepare it for an amphibious assault.

“These swimmers may be discharged through torpedo tubes of submerged submarines or they may be dropped overboard close to shore and would tow the tank to a point near the beach,” the narrator explains to footage showing the system in operation. “While this test tank was manually operated, future developments will provide a time delay and automatic release of the spray while the swimmer escapes.”

Near the end of the movie, the narrator notes that the Navy’s battleships, destroyers and other surface vessels could lob shells filled with chemical or biological weapons at targets on shore. The Marine Corps could do the same on land with howitzers and mortars.

Where can the Navy attack?” the narrator asks. “As long as the Navy commands the seas, it can deliver a biological or chemical attack anywhere on that three quarters of the earth’s surface that’s covered by water.”

“And its carrier based aircraft can strike hundreds of miles inland from any coastline and attack a large portion of an enemy’s population, shipping and industrial centers,” the speaker adds.

The Navy also prepared to defend against an enemy who might launch similar attacks. Special water spray systems and air purifiers would hopefully keep contaminants off ship decks and away from sailors inside. Otherwise, sailors had to rely on gas masks and other protective gear.

More than a decade after the Navy made its film, the sailing branch began the Shipboard Hazard and Defense program — a.k.a. Project SHAD — to find out just how vulnerable the fleet was to poisons and germs. The tests were part of a larger Pentagon effort known as Project 112.

By then, the Navy and its sister services had decided to focus on nuclear weapons as the primary means of countering a massive Soviet offensive. In 2000, the Pentagon and the Department of Veterans of Affairs began looking at possible long term health issues stemming from the Project 112 experiments.