Fire! America Loves to Go to War with the M4 Carbine 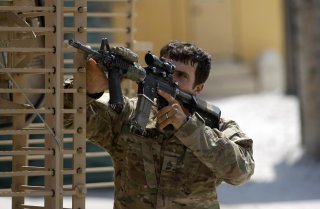 Key Point: The story of the M4 goes back to the mid-sixties and the early days of the Vietnam War.

Image: A U.S. army soldier from 2-35 Infantry Battalion aims his weapon as he looks for a source of gun fire and rocket propelled grenades fired by the Taliban at a forward firebase fortress in Kunar province, Afghanistan, July 11, 2011. REUTERS/Baz Ratner.