Fire in Its 'Belly': The B-1 Lancer Bomber Is Getting Supersize Upgrades 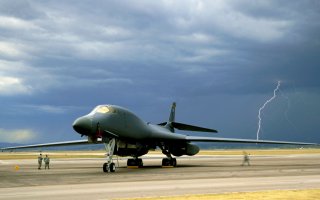 Here's What You Need to Know: The U.S. Air Force still expects to fly the B-1B into the early 2030s.

The U.S. Air Force's B-1B Lancer bomber can't be enlarged, but efforts are now underway to "supersize" its carriage capabilities. Last month one of the Cold War-era bombers took part in an external captive carry flight over the skies of Edwards Air Force Base, and that demonstration could pave the way for the B-1B to carry hypersonic weapons externally.

"Adapting a small number of our healthiest B-1s to carry hypersonic weapons is vital to bridge between the bomber force we have today, to the force of tomorrow," said Gen. Timothy Ray, commander of Air Force Global Strike Command. "This is a major step forward in our global precision fires capability and it is important we pursue these technologies to remain ahead of our competitors. My goal is to have a limited number of B-1s modified to become the roving linebacker of the western Pacific and the North Atlantic."

For the Air Force, the captive carry flight was the culmination of the numerous ground tests that began last year with an expanded carriage demonstration. It included a modified internal bomb bay, which featured a moveable bulkhead. Last month's test flight at Edwards Air Force Base further demonstrated a configuration of the B-1 that could allow the aircraft to carry larger-sized weapons both internally and externally.

"We're essentially displaying our external weapons carriage capability," added Maj. Bret Cunningham, a B-1B test pilot with the 419th FLTS. "We have a JASSM weapon on what is traditionally the targeting pod pylon on the forward right hard point, so we are demonstrating that the B-1 has the capability to carry weapons and employ them externally."

The B-1B, which was produced from 1983-1988, was designed with three internal weapons bays with an internal payload of 75,000 pounds, as well as with a movable bulkhead and usable external hardpoints for its original nuclear mission. The maximum external weapons payload could include an additional 59,000 pounds – however, the United States shifted the aircraft's mission to conventional weapons in 1994. That physical conversion to conventional-only armaments started in 2007 with the Strategic Arms Reduction Treaty (START), and the modifications were completed in 2011.

The recent extensive engineering review could now help the Air Force understand where it needs to focus to maintain the aging warbird as a multi-mission weapon system, which could lay the groundwork for the integration of future weapons on the aircraft.

The Air Force still expects the B-1B to fly off in the sunset, or at least be retired from service by the early 2030s, but it needs the aging bomber to remain operational for current threats. It could still be sometime before its replacement, the B-21 Raider, is fully operational. In the meantime, the B-1B continues to be updated and adapted for the changing geopolitical situation.

The current expanded carriage demonstration will thus be able to keep the aircraft compliant with the New START agreement, which means the B-1 can still be utilized to deliver convention weapons. The proposed increase in capacity with the external carriage could also be a force multiplier of sorts as two bombers would equal three bombers worth of weapons.

"Since the long-bay demo last year, this has really been our key focus point in 2020; getting ready for this external weapons-release demo as kind of the next step in that progression towards external weapons carriage and hypersonic capabilities for the B-1," Cunningham said. "We're pretty close to the culmination of this demo event and reaching that next milestone."

Following the recent captive carry mission, engineers will review the data before moving on to the next phase of testing, which will be an external weapons release.

"For us, we're looking to do this safely since this is the first time we will release a weapon from the external hard point in over 30 years," said Agustin Martinez, project test lead. "So, we focused on doing a safe build-up approach … to make sure the JASSM and the B-1 are communicating correctly; the JASSM has correct surface deployment timelines. Once it does get released, it will safely separate."

The U.S. Air Force has continued to keep its B-1B bomber fleet updated and upgraded. In September, an eight-year-long project to install the Integrated Battle Station (IBS) on the bombers was completed ahead of schedule. A total of sixty of the late Cold War-era aircraft went through the modification process, which began in late 2012. It was reported to be the largest and most complicated modification performed to date on the B-1 and it gave the flight deck a completely new look.