The First Jet Dogfighters: F9F Panthers vs. MiG-15s in Korea 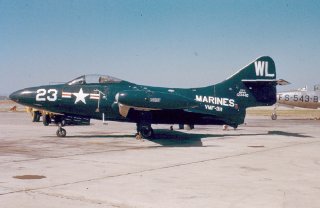 Here's What You Need to Know: Though clearly outclassed by the MiG-15, the Panther was more maneuverable at certain altitudes and possessed a superior armament of four twenty-millimeter M3 Hispano cannons in the nose.

Naval aircraft manufacturer Grumman received funding in 1946 to develop a four-turbojet G-75 prototype based on the twin-piston engine F7F Tigercat. However, the concept proved so unpromising the firm used creative accounting to use the funds for a single-engine project called the G-79. This XF9F prototype first flew in November 1947 from the production facility in Bethpage, New York.

Like the P-80 Shooting Star, the U.S. Air Force’s first jet fighter in operational service, Grumman’s new design retained a traditional straight-wing configuration that limited its performance when approaching the speed of sound. The Grumman designers appreciated the need for naval aircraft to be rugged to withstand harsh flattop landings and conditions at sea. The Panther had folding wings to ease storage on crowded decks and introduced new pilot-pleasing features such as ejection seats and a pressurized cockpit.​

Once President Truman authorized U.S. forces to intervene in the conflict, one of their first objectives was obtaining air superiority. On the morning of July 3, the Navy dispatched piston-engine Skyraider and Corsair fighters from the carrier Valley to destroy the NKPAF’s aircraft at the airfield in Pyongyang. Flying their first combat mission, F9F-3 jets of VF-51 swept ahead of the main force to clear the skies of any North Korean fighters that made into the air.

One of Glenn’s buddies in VMF-311 was legendary Red Sox hitter Ted Williams. The ballplayer was called up by the Marine reserves and flew thirty-nine combat missions over Korea. Flak knocked out the hydraulics and electronics of his F9F while he was raiding a training camp south of Pyongyang. Unwilling to risk injury to his knees by ejecting, Williams piloted his flaming Panther all the way back to base. The Californian emerged unscathed from a fiery crash landing. and was playing ball again within a year.