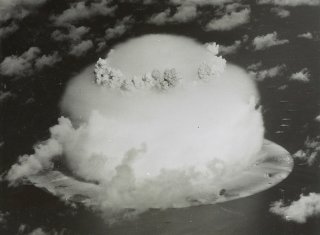 As I sat in a darkened cinema in 1998, mesmerised and unnerved by the opening nuclear bomb explosions that framed the beginning of Roland Emmerich’s Godzilla, it felt like I was watching the most expensive special effect in history.

Vast expanding clouds and fireballs eclipsed their surroundings and smothered everything in their path, dropping radioactive material that gave rise to the title monster. I had never encountered anything like this. I appreciated the creativity of those 90s films that tried to push visual boundaries through emerging computer technology, but this was on a different scale. I later discovered that there was a good reason for this – the footage was real.

The film did win awards for its special effects, although that was for the giant lizard itself and scenes of New York landmarks being shattered by its rampage, not the precise origin or significance of those fleeting mushroom clouds.

I kept coming back to those images and the accompaniment of haunting, almost other-worldly, choral music. It sent shivers down my spine, and still does every time I re-watch it.

It was that footage which started my journey towards research into nuclear history, and which led to me becoming a visiting fellow at the British Library’s Eccles Centre for American Studies, where I study their collections, including the early pictorial history of nuclear testing.

Many of those iconic images which originally stunned me came from the aptly named Operation Crossroads – an exercise 75 years ago involving the first postwar nuclear weapons tests in July 1946, conducted by a joint US army-navy task force in Bikini Atoll in the Pacific. It involved 42,000 people, around 150 support vessels and over 90 target ships and submarines.

It also used over half the world’s supply of film footage and hundreds of cameras to capture the nuclear detonations. Officially, this extensive filming was driven by military policy and scientific considerations, US political and military leaders wanting to understand the effects of this new weapon. At the same time, the demonstration of these weapons on film also served to showcase US power to a global audience.

The literal and psychological shock waves of that event were significant in the early cold war and in shaping the modern world, from setting precedents for thousands of subsequent bomb tests and accelerating the arms race to long-lasting radioactive environmental damage in locations where these tests occurred.

Crossroads even led to the invention of a language of terms to describe nuclear testing (through over two months of negotiation). Some terms agreed on are perhaps less familiar, including “cauliflower cloud” and “base surge”, while others (like “fallout”) have become ubiquitous since.

Crossroads had such an impact because it was almost a blockbuster movie production in its filmic scale and focus – a military-scientific cinematic spectacle, unique among over 2,000 nuclear tests conducted worldwide by all nations since.

Even as much of its cold war origins and significance lie forgotten, Crossroads’ cinematic legacies have lived on over the last 75 years. Photos and footage from it have been used widely, from propaganda to popular culture: from Godzilla movies to internet memes. It has been employed to inform, to protest, as cultural symbols, and in ways which have obscured or re-framed aspects of nuclear history, shifting away from legacies of US testing, or even making the bomb a monster-destroying weapon (seen not least through Godzilla), much like a mushroom cloud enveloping everything in its path.

The world’s most expensive film shoot

Crossroads fundamentally changed the film profile of atom bombs. Still images of those dropped on Hiroshima and Nagasaki in 1945 had appeared in many newspapers, but there was limited camera footage of these. There were also only a few thousand TVs in the US in 1946, so for many the Crossroads footage would be watched in cinema newsreels (whether in the US or other countries).

The Crossroads plan was large in scale and complexity, but underpinned by one central concept: assembling a fleet of around 90 decommissioned US naval ships (including three captured German and Japanese vessels), anchoring them in a remote lagoon in the Pacific (Bikini Atoll) and setting off atom bombs against them. A truly blockbuster plan.

The stated goal was to test how atomic bombs would affect naval vessels, better to improve the design of future ships and such defensive arrangements as anchoring them in harbours, in the event that America faced the atom bombs of other nations in the future – though only the US had the bomb at this time. But Crossroads was later widened to test damage to other types of material and equipment, as well as measuring various effects of the weapons, such as (rather unsettlingly) the biological impact on thousands of animals present on target ships, including pigs, goats and rats.

Crossroads has been described as one of the most photographed events in history, and this had had several practical effects for moviemakers, even before the first weapon had been exploded. As more than half the world’s available stock of film footage was bought up for cameras to record the tests, there were months of shortages in Hollywood and other major studios around the world.

New high-speed cameras were used to capture even the first fractions of a second after detonation (although these didn’t always go to plan). Subsequent nuclear tests prompted further developments of these technologies, some of which would later make their way into fields from commercial cinematography to medicine.

Some of the first drone cameras – a concept evoking images of 21st-century movie-making – were also significantly developed and used in Crossroads. Large four-propeller engine B-17 bombers were rigged with TV cameras and transmitters so that they could be flown remotely as drone aircraft, to film the explosions and to collect radioactive samples from clouds. Similar arrangements were made for small, un-crewed boats. While a far cry from modern military and civil drones, such experiments were groundbreaking, leading to shots that would previously have been impossible, and laying foundations for future developments in both drones and in remote-controlled photography.

Development of the atomic bomb had been shrouded in the utmost secrecy throughout the second world war, to the point that the public and most members of Congress didn’t know about it until after Hiroshima was bombed. Even Harry Truman – as vice president – hadn’t known of its existence until he succeeded President Roosevelt in April 1945. This made the widespread publicity of Crossroads as a global media event one year later even more remarkable. Observers were invited to attend the tests from such unlikely places as the Soviet Union.

While the visuals of nuclear tests may be well recognised, the sound adds another dimension to their impact. The orchestras of the US Armed Forces provided custom music for films of the tests, whether for classified or public consumption, akin to the dramatic soundtracks of action or superhero adventures, or the eerie music of horror movies that creates the atmosphere.

The music was usually reserved as rousing chords for the opening and ending, or particularly poignant moments, such as observing damage to ships, though not for the detonations themselves. By contrast, all cinematic and documentary uses of Crossroads almost always overlay detonation footage with dramatic music.

One of a kind

“Those black dots are battleships? But they’re so tiny,” was the amazed reaction of one student when I showed their class footage from Crossroads – it was by no means an isolated response. The iconic nature of those images partly stems from Crossroads being distinctive among nuclear tests, particularly the second detonation, Crossroads Baker, on July 25 1946.

Almost all nuclear weapons tested have either been detonated within the atmosphere (ground or air, sometimes on the verge of space), in which case the first sign of the explosion has involved a blinding flash obscuring everything, or underground, in which there was often much less to see, except eerie videos of the earth slowly giving way to form a crater before kicking up dust. Underground testing could, of course, still lead to dramatic (and disturbing) footage, such as the ground rising up before exploding, a particularly notable example being the Operation Storax Sedan detonation in 1962, which was testing (almost unbelievably) ways of using nuclear weapons for civil construction in large excavation projects.

Crossroads Baker, meanwhile, was detonated just underwater, meaning it could be observed from the moment the explosion reached the surface. The visual effect was also made all the more powerful by the surrounding lagoon, the rapidly expanding blast hurling what were later estimated to be over two million tonnes of water and spray high into the air.

The scale of subsequent test series was different. While the bombs increased in power hundreds of times after Crossroads (and tests grew from using two weapons to sometimes up to 30 or 40 in a single operation), never again was there such a fleet assembled to be bombed.

Filming of tests became an industry in its own right, with subsequent tests having an entire US Air Force studio at Lookout Mountain Laboratory being dedicated to them. But there was rarely the same gathering of news media or scale of filming as at Crossroads. Footage of later tests, while still released in some propaganda and news films, also became less public for various reasons, including security.