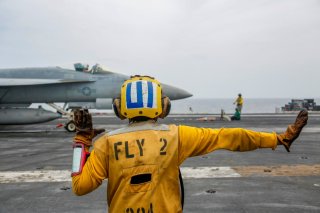 During Australia’s last maritime wargames with the US, Japan, Canada and New Zealand in August, Chinese surveillance ship Yuhengxing transited through Australia’s exclusive economic zone. Prime Minister Scott Morrison affirmed China’s ‘right to operate’ in Australia’s EEZ ‘just like we have every right to be in the South China Sea’.

The US Navy’s new SSN(X) nuclear-powered attack submarines are being developed to have more stealth and speed, and to carry more torpedoes, combining stealth technology from the Virginia class and the significant torpedo payload of the Seawolf class.

If Australia leases US nuclear submarines to avoid a capability gap before its SSNs arrive, it’s likely they’d be the Los Angeles class. Australian submariners could then train on these nuclear-powered vessels before Australia’s new submarines arrive. For its new fleet, Australia will likely choose between the Royal Navy’s Astute class and the US Navy’s Virginias.

During a ceremony at RAAF Williamtown on Monday, the Royal Australian Air Force officially retired its fleet of F/A-18A and F/A-18B ‘Classic Hornet’ fighter jets after more than 30 years of service. Since entering service in 1984, RAAF Classic Hornets have flown more than 400,000 hours on thousands of missions and were a key part of Australia’s defence capability supporting US-led operations in Afghanistan, Iraq and Syria. The Hornets will be replaced by the new F-35A stealth fighters next year.

On 18 November, the Taiwanese military inducted the first of its upgraded F-16 Viper fighters and became the first country to field combat-capable F16Vs. In a ceremony at Chiayi Air Base, Taiwanese President Tsai Ing-wen commissioned 64 F-16Vs into service and noted that the aircraft symbolised Taiwan’s close relationship with the United States. The new military hardware comes as Taiwan faces an increasingly assertive China conducting regular flights through Taiwan’s air defence identification zone.

The British Army is set to return to Germany in force, with plans to base a ‘brigade-sized force’ including armoured vehicles there as part of the largest force restructure in the past two decades. The ‘radical’ announcement represents a major U-turn after the UK last year ended its permanent military presence in Germany, which had been maintained since World War II. The new plan envisages Germany as one of three ‘regional land hubs’ for the army, alongside Oman and Kenya.

NASA has partnered with SpaceX to launch its new DART (Double Asteroid Redirection Test) aboard a Falcon 9 rocket. The DART spacecraft is on a ‘first-of-its-kind mission’ to test the ability of kinetic force to change an asteroid’s trajectory and defend the earth from potentially hazardous collisions. DART will now travel nearly 10 million kilometres and slam into an asteroid called Dimorphos next year—at more than 24,000 kilometres per hour. Even a small change to the asteroid’s course and speed is expected to have a great impact over time.

Russia’s Prichal (‘pier’) nodal module successfully docked with the International Space Station on 26 November, and is likely to be the final Russian ISS element. Prichal and its six docking ports were envisaged as allowing further expansion of the Russian segment; however, the Russian space agency has cancelled plans for further modules, viewing the ISS as unviable past 2025. The first spacecraft set to dock with Prichal—a Soyuz MS-21—is scheduled for March next year with a crew of three cosmonauts.

The Australian government is set to release draft legislation mandating that social media companies collect user details to allow courts to identify users and aid defamation cases. Prime Minister Scott Morrison says the ‘online world shouldn’t be a wild west, where bots and bigots and trolls and others can anonymously go around and harm people’. While it’s not clear what data companies will be required to collect, experts contend that the legislation’s focus on defamation won’t do enough to combat cyberbullying unless it also stipulates a duty of care to consumers.

Surveillance research firm IPVM has alleged that the Chinese province of Henan has commissioned 3,000 facial recognition cameras to monitor journalists and international students. The ¥5 million ($1.1 million) contract was awarded to Neusoft in September, and more than 2,000 security officials will operate the cameras that categorise people in a traffic-light-style system in order of increasing risk. Human Rights Watch’s China director Sophie Richardson says the ‘goal is chilling, ensuring that everyone knows they can and will be monitored’.