Five Films That Explore What It Feels Like to Truly Grieve 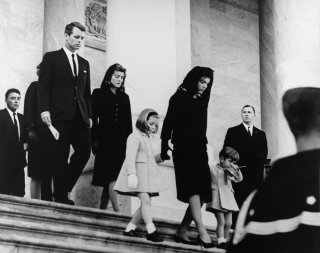 Grief is a common theme in cinema, it provides emotional, character-focused situations that for many viewers are instantly familiar. Most of us know what the characters on screen are going through, we understand the disorientating swell of feelings and acute sense of loss that the actors articulate and perform because we are more than likely to have experienced them ourselves.

This familiarity leads many films to approach grief in purely narrative terms, to have bereavement as an inciting incident from which to begin the story. There are films, however, that seem more interested in exploring grief as a sensation often experimenting with film form in order to capture a sense of the lived experience of grief.

Here are five such films that to try to convey through empathetic aesthetics what it feels like to really grieve.

Jackie offers a highly subjective portrait of Jackie Kennedy (Natalie Portman) in the moments and days following the assassination of her husband, John F Kennedy (Caspar Phillipson). While whispered and out-of-focus political manoeuvrings take place in the background, the camera rarely moves from a tight, handheld close-up on Portman’s face.

When it does, it tracks smoothly and at some distance as she moves through the cavernous and unpopulated rooms of the White House. A jarring juxtaposition is created by this interplay of shot types, conveying the sense of disorientation Portman’s character is experiencing.

The film contains very few “scenes” in the traditional sense. Instead, the majority of Jackie plays out as incomplete moments, frequently out of chronological order, that create a fragmented, almost cubist, picture of acute grief following a sudden and unexpected death.

The viewer establishes an intimate relationship with the eponymous Morvern (Samantha Morton), as no other characters in the film ever know she is grieving for her boyfriend – whose suicide Morvern covers up in order to live a new life. This privileged position forms an unspoken pact that invites us and only us to witness Morvern’s grief.

Morton’s performance is a study of near-silence and stillness, allowing the viewer to experience “silence as an individual, personal state of being”, according to the film academic Sarah Artt. No memories or feelings are articulated vocally, and director Lynne Ramsay eschews the flashback in favour of poetic imagery that resists clear meaning while inviting interpretation.

At different moments in the film, Morvern repeatedly appears and disappears, unable to be contained by the image. We see this at play as she is sat in her front room as Christmas tree lights flash on and off; when she is dancing at a house party and wandering through a Spanish nightclub. In these moments, and throughout, the film articulates the impermanent and deeply interior nature of identity when a person is grieving.

Vital is not an easy watch because the film is so effective at creating an aesthetic that is empathetic to the painful sensations experienced by Hiroshi (Tadanobu Asano), the film’s central character.

Hiroshi awakens from a coma suffering amnesia, having been the driver in a car accident that killed his girlfriend Ryôko (Nami Tsukamoto). Memories of the crash and of Ryôko increasingly pierce his waking state, grief overwhelming both him and the audience. It does the latter by offering a “haptic” viewing experience – what film theorist Laura Marks describes as a visuality that functions like the senses by triggering physical memories of smell, touch, and taste – through its hyper-focus on different textures, loud discordant sounds and choppy editing.

As the philosopher Havi Carel writes, the film’s sensory focus “is mirrored in the viewer’s reactions to the film … it moves, touches, disgusts and awes the viewer in a process parallel to Hiroshi’s”, portraying in an uncomfortably subjective way his grieving experience.

Few films capture the physical toll and lasting trauma of grief in the manner that The Babadook does. While masquerading as a “creature feature” horror film – an incredibly effective one – The Babadook is in the main a character study that explores the visceral effect of grief trauma on Amelia (Essie Davies), as she becomes increasingly sunken-eyed, pallid-skinned and disconnected from reality.

The Babadook itself is a beast-like manifestation of her unrelenting grief that continues to dog her seven years after the death of her husband. She is still plagued by nightmares, visions and flashbacks of the car crash that killed him. These moments continually rupture her daily routine, as she relives the site of her grief as an ever-repeating cycle typical of trauma survivors, who experience “durational rather than chronological time” and so “continue to experience the horrors of the past through internal shifts in time and space”.

Casey Affleck won the Oscar for best actor for his portrayal of Lee Chandler, a man reeling from a tragedy in his recent past. Affleck offers a restrained, emotionally distant performance that befits a character who exists but struggles to live, who has neither the ability nor the desire to “get over” his grief.

The film reflects its central character’s emotional stasis through a lack of tonal variation, an almost ubiquitous use of static long shots, and – with one notable exception – a lack of signposting for its flashbacks that captures realistically the subconscious, punctuating nature of memory.

Given that the classical three-act structure demands resolution, it is rare for a film about grief to resist the familiar arc of a character moving through stages to a place of relative contentment at the film’s close. The absence of emotional resolution for Lee Chandler is refreshing, because in truth grief rarely follows a neat and finite linear path.

Jimmy Hay is a Lecturer in Film and Television at the University of Bristol.