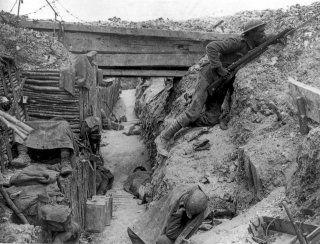 Key Point: Trench weapons started as weapons made by soldiers who were actively fighting in the trenches. Eventually, the military forces caught on and began issuing their own.

World War 1, or the Great War, was a 20th-century war fought with 19th-century tactics. The result led to the advent of war machines the world had never seen. The fearsome weapons employed sent men to the trenches and created a meat grinder of a conflict.  We saw the rise of nerve gas, machine guns, tanks, and submachine guns. We also saw the rise of trench weapons.

Infantrymen at the time were armed with long, bolt-action rifles designed for warfare at a distance. These rifles were clumsy and slow to handle in close quarters combat, and when you were taking a trench, it was nothing but close-quarters combat. Trench weapons started as weapons made by soldiers who were actively fighting in the trenches. Eventually, the military forces caught on and began issuing their own.

These weapons were fielded in various designs by both sides and used to take trenches and eliminate sentries, while offering some degree of protection in the close quarters of the bloody trenches.

The most famous trench weapons of World War 1 were trench knives. Soldiers had bayonets, but they were often more of a short sword than a knife. They proved unwieldy in the tight trenches, and soldiers began making knives meant primarily for fighting in cramped spaces, where stabbing was a more feasible technique than slashing. The Germans, French, Canadians, Americans, and others all eventually had their own versions of the trench knife.

Some were push daggers, sometimes made from stakes used to pin barbed wire down or whatever else a soldier could scrounge up that was sharp and pointy enough. These little blades made it easy to launch yourself into an opponent, deal serious damage, and move on. Eventually, military forces caught up and rushed out knives for soldiers, including the famed American M1917 and Mk 1 trench knife, that could do the same job.

This knife combined brass knuckles with a blade to deliver a brutal dual-purpose weapon for close-quarters use. Speaking of brass knuckles…

Related: THE SPECIAL OPERATIONS THAT PAVED THE WAY FOR D-DAY

Brass knuckles were a popular trench weapon brought into battle by individual Joes. Knuckle dusters have been around forever in one form or another. In the American Civil war, they were a popular choice in the trenches, and that tradition lived on as Americans headed to the fight in Europe.

Brass knuckles, or knuckle dusters in general, we made from a wide variety of materials. They offered an extra sting to your punch that could break bones by focusing the force of your punch into a smaller area. It also offered some degree of protection for the wearer’s hands during a scuffle. Breaking a knuckle in a war zone is never a good time.

You could put them on and basically forget about them. You can still wield a rifle or pistol while wearing them, albeit clumsily. However, when you came over that trench and started swinging the knuckles, some steel reinforcement could save your life.

Clubs, and not the dance type, were used to great effect by trench raiding parties. A club-like weapon is super easy to use and can deliver an extreme amount of damage. It doesn’t require any special training, and you could quickly disable or even kill a soldier with just a swing or two of a club trench weapon.

Soldiers most commonly wielded short, single-handed trench clubs made from everything and anything they could get their hands on. They used clubs as simple as heavy pieces of wood, or as ornate as custom-made maces. Some mixed in nails, bullets, and barbed wire to make their clubs even more effective.

A common adornment to the club was a lanyard to make sure your enemy never took it from you in a fight, and you could hang it from your wrist as you climbed or shot your rifle. In an instant, it can come to your hand for a fight. Similar lanyards can still be found on everything from pocket knives to flashlights used in combat today.

Spears made a bit of a comeback in World War 1 trenches. As the war started, every major force mounted lance men, but the lancemen and cavalry were put down quickly by the Maxim gun, an early recoil-operated machine gun. While lancemen on horseback didn’t prove effective in the Great War, lances and short spears still made an impact in the trenches.\

These pole weapons became favored for fending off enemy soldiers who were raiding trenches. The Brits, in particular, utilized pikes to repel attackers from entering the trenches they occupied. Their long reach, lightweight design, and simplistic nature made them handier than even rifles equipped with bayonets.

I imagine this type of trench weapon was perfect for fending off men coming over the top of your trenches. They could slow an assault and allow men to use guns to kill the attack’s momentum.

Finally, soldiers turned their common everyday tools into effective trench weapons out of creativity or sheer desperation. Your basic hand tools could be quite fierce in the trench. A simple Entrenching tool could dig into the dirt but also slam into an enemy’s face with great effect.

Since World War 1 e-tools, as they tend to be known, have always been a last-ditch weapon. Even today’s infantrymen often joke about their desire to get an ”e-tool kill.” Soldiers also turned simple hammers and hatchets into trench weapons. Sometimes simplicity fits the bill, and basic tools make fearsome weapons. Plus, after you hit the bad guy, you could make handy dandy repairs. To me, that makes it a multitool.

World War 2 is a war we look at with some form of romanticism in our eyes. It’s harder to find bad guys worse than the Nazis, after all. Wars are always brutal, but one in which soldiers are wielding homemade knives, brass knuckles, clubs, and the like is exceptionally violent in a very personal way, even when compared to the widespread destruction of the Second World War.

Killing an enemy from thousands of feet above or hundreds of miles away is a heavy undertaking, but doing so within the muddy trenches of World War I, armed with nothing but a shovel and your will to survive, is something else entirely.