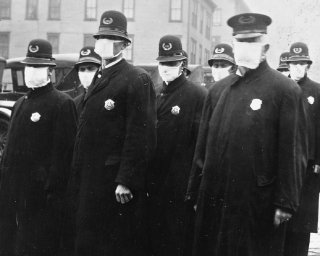 Here's What You Need to Know: As the coronavirus shows, disease can still afflict even the most modern societies, and the best-equipped military organizations.

Disease and war have long worked hand in hand. Concentrations of soldiers operating in unfamiliar circumstances allow the transfer and spread of pathogens across wide populations, including both civilians and opposing armies. For most of human history, disease has inflicted a greater toll on combatants than battle itself. On some occasions, armies have used disease to their advantage, inflicting a horrific toll on their enemies. Here are five of the most militarily important plagues in human history.

The first great historian of war, writing the first great history of a war, fittingly wrote of one of war’s greatest plagues. At the beginning of the Peloponnesian War of 431 BCE, Sparta invaded Attica, the agricultural lands that surrounded Athens. Athens controlled the sea, was protected by high walls (all the way to the port of Piraeus), and had sufficient funds to buy food from abroad. Consequently, the Athenian leader Pericles decided to draw the population of the countryside into the city. The concentration of masses of people in the city had a predictable effect; plague. The disease struck in the second year of the war with devastating consequences. Thucydides described the course of the plague with unsettling detail, both in terms of its progress through the body and its impact on the body politic. Overall, it may have killed half of Athens, including the leader Pericles, and it also afflicted Athenian garrisons around the Peloponnese. Eventually it would afflict Thucydides himself, although it did not kill him. In the end, the plague did not break Athens, but it certainly undercut the city-state’s military capabilities for the rest of the war.

The Second Cholera Pandemic (the first occurred between 1817 and 1824) seems to have begun in East or South Asia in the late 1820s. It struck first in India, then appeared in China, Indonesia, and the Philippines. By 1829 it had reached the Urals. The plague struck just as Europe was undergoing the first widespread set of upheavals since the end of the Napoleonic Wars. A revolution in France overthrew King Charles X; a revolution in Belgium won independence from Holland; uprisings in Poland, Portugal, Switzerland, and Italy threatened the tenuous peace established by the Congress of Vienna. Into this vortex cholera struck with a vengeance, killing hundreds of thousands across the continent. The devastation may have forestalled a general European war, however; just as the Prussian Army was mobilizing for potential intervention in the Polish Uprising, the disease struck and killed two of its senior commanders, August Neidhardt von Gneisenau and Carl von Clausewitz. The latter passed away shortly before he could complete the edits to his magisterial On War, leaving that work to Marie von Clausewitz.

The Spanish official Hernan Cortes landed in April 1519 with a small force of soldiers and sailors. He rapidly accumulated local allies dissatisfied with Aztec rule. Months of seesaw battles ensued, with the Spanish at one point taking control of parts of the main citadel of Tenochtitlan, the Aztec capital, and at other times conducting a running fight against the Aztecs in the countryside. Spain’s chief ally, however, turned out to be smallpox. In the fall of 1520, Tenochtitlan was struck by the disease, which raged for over two months. The emperor died, along with roughly half of the rest of the population. Smallpox undercut the ability of the Aztecs to wage an offensive strategy, and so they settled in to defend their capital. Food production collapsed. Cortes and his allies (far more resistant to smallpox than the Aztecs) besieged the plague-stricken city, finally taking it in 1521 as famine and starvation took hold.

The fifth century had seen the final collapse of the western half of the Roman Empire, and the conquest of Italy and Rome itself by barbarians. Emperor Justinian I, reigning over the eastern half of the empire from Constantinople, determined to retake much of the lost territory. The Romans first attacked and destroyed the Vandal kingdom of North Africa, then moved on to Italy. The Byzantine general Belisarius eventually captured Rome and Ravenna, largely establishing control by 540. Then the Plague of Justinian hit. Some 40 percent of the population of the imperial capital died during the plague, which lasted from roughly 541 to 543. Justinian himself caught the disease, but did not die. Economic activity ground to a halt. The military power of Rome was badly undercut, both because of a loss of manpower and a want for money. In 568, the Lombards rolled back the Byzantine reconquest, the last gasp of Roman hegemony in the West.

In early 1918, the Germans hoped to strike a decisive blow on the Western Front before enough American troops arrived to overwhelm them. However, with the Americans came the Spanish Flu, a particularly lethal form of influenza. The first wave of the influenza would hit in the spring, undercutting the effectiveness of all of the armies just as the German offensive struck. In autumn the second wave of influenza struck, wreaking an awful toll on all of the armies. The Germans suffered worst, however, as their morale was broken and the British blockade had left them without sufficient food. In the end, the Spanish Flu would kill far more people than all of the combatants of the war combined.

Modern medicine, combined with the lethality of modern weaponry, has shifted the ancient balance between disease and combat. In World War II, more people died from bullets, shells, and bombs than from disease, a pattern that has generally held true ever since. But as the coronavirus shows, disease can still afflict even the most modern societies, and the best-equipped military organizations.