Five Weapons That Show Why Kel-Tec Is So Controversial 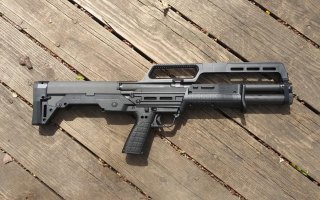 Here's What You Need To Remember: All in all, the KS7 is probably one of the best bullpup shotguns on the market. But bullpup shotguns are incredibly niche because they aren’t all that useful in the end. Conventional shotguns dominate the hunting, sporting, and tactical use cases, and the KS7 is unlikely to change that.

This article first appeared earlier this year and is being republished due to reader's interest. It originally appeared as multiple articles and is being packaged together for reader's convenience.

The immense demand for Kel-Tec products may be to blame for some of these issues as well, as firearms may be rushed out the door once they are considered to be safe and proofed without further testing being done for reliable feeding or cycling. However, their QC department is considered to be among one of the best in the business, to presumably placate those complaints and retain customers.

The Kel-Tec RDB is a very mechanically interesting design, but has poor ergonomic qualities and a questionable ejection mechanism.

The Kel-Tec Rifle Forward-ejecting Bullpup (RFB) is one of the most interesting rifles released in current years. Designed to take common magazines, eject forwards, and be fully ambidextrous, the RDB mirrors the feature set of the earlier FN F2000 and the later Desert Tech MDR. However, unlike those two rifles, the RFB employs an entirely different mode of operation to lock up its chamber when firing. Is it better or worse?

The defining feature of the Kel-Tec RFB is its tilting bolt and extractors. In order to feed empty casings into the ejection chute above the barrel, the extractors are designed to tilt upwards from the bolt face during the rearward portion of the recoil cycle. When the bolt returns forward, the bolt strips a fresh cartridge from the magazine while simultaneously shoving the empty casing into the ejection chute. When the casing is pushed into the chute, the extractors pivot downwards to lock onto the rim of the fresh cartridge. As such, vertically tilting extractors would be hard to design into a rotating locking bolt, the entire bolt locks via tilting, a relatively uncommon feature in modern firearms.

While some firearms in the past used tilting bolts, notably the German Sturmgewehr 44, Soviet SKS, and Belgian FN FAL, most modern firearms use rotating bolts due to their stronger, more consistent lockup and simpler design. Tilting bolts also distribute the pressure of firing unevenly in the rifle, compared to the simple lug to recess contact that rotating locking systems provide.

But FN’s F2000 design is arguably better, as it utilizes the same reliable rotating bolt system with a fixed extractor. Casings are simply directed into a chute on the receiver wall during the recoil cycle, and then additional parts eject the casings when a certain point is reached. The RFB is said to be inconsistent when it ejects; sometimes buildup of cartridges in the chute can cause jams. Conversely, the F2000 is designed to store five cartridges in the chute and then eject them all in one go. By most accounts, the FN system is more reliable.

The Desert Tech MDR uses a variation on the FN system, basically deleting the chute. A plate covering the ejection port catches cartridges and pushes them forward. While not as “forward ejecting” as the F2000 or RFB, the MDR’s is far simpler and allows for easier clearance of jams near the chamber, as well as for operation as a conventionally ejecting bullpup.

Ergonomically, the MDR also blows the RFB out of the water. The RFB uses FN FAL magazines, which are designed to rock and lock-in. But the RFB’s design allows them to be inserted straight in. This can lead to magazines being seated too low, causing feeding issues or issues with the bolt stop. They also can need to be kicked free or pulled out when the mag catch is depressed, slowing reloads.

On the other hand, the MDR uses AR-10/SR-25 pattern magazines, which are designed from the outset to be straight insert. This allows for faster reloads and manipulation.

Finally, the RFB’s bolt catch is a tiny lever near the mag well, that one must flick to release. The MDR’s is a large button, far easier to hit under stress.

While the Kel-Tec RDB is a very mechanically interesting design, its poor ergonomic qualities and questionable ejection mechanism have prevented anyone from adopting the design for serious use. In many ways, it can be seen as a true bullpup modernization of the FAL design, but the boat has sailed on most interest in the FAL for good reason.