Flanker: The Russian Fighter Jet That Could Wage War Everywhere 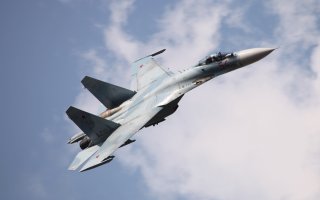 Here's What You Need to Know: Russia continues to build highly maneuverable jets.

This guide should clarify the capabilities of the most important Flanker derivatives, which countries fly them and the nature of their operational career.

In the 1970s, the United States deployed its first fourth-generation jets—the F-14, F-15 and F-16. These could carry heavy weapon loads and cutting-edge electronics (look down–shoot down capable doppler radars, heads-up displays, fly-by-wire avionics, digitized instruments) but still execute tight air combat maneuvers necessary to prevail in a short-range dogfight. In the late 1960, the Soviet Union began developing a long-range ‘heavy fighter’ that, unlike the interceptors of the day, could still take on such agile opponents.

The Soviet ‘F-15 killer’ was intended to escort bombers on long range missions, as well as intercept NATO aircraft before they penetrated Soviet airspace. Meanwhile, shorter-range MiG-29 fighters would provide tactical air support for Soviet ground forces. Sukhoi tested two different T-10 prototypes in the 1970s and 80s, dubbed the ‘Flanker-A’ after they were spotted by NATO recon satellites. Finally, the production-model Su-27S ‘Flanker B’ entered service in 1985 and soon began performing intercepts of NATO aircraft.

The large, twenty-two-meter long fighter carried enough fuel for a combat-radius of 900 miles and was powered by two AL-31F Saturn turbofans which could propel it over twice the speed of sound. The Su-27 boasted N001 Mech (Sword) doppler radar with a maximum range of eighty miles, eight weapons hardpoints, fly-by-wire controls and a heads up display (HUD). It also added an Infrared Search and Track system and a helmet mounted sight which allowed the pilot to target enemy aircraft with highly-maneuverable R-73 heat-seeking missiles—even if the targets were not directly in front of his plane’s nose. A GSh-301 30mm cannon served as a backup weapon and was retained on later Flanker models.

The Flanker, furthermore, was supermaneuverable—capable of executing maneuvers beyond usual aerodynamic principles. When Moscow publicly unveiled the Flanker in the Paris Air Show of 1989, Soviet Viktor Pugachev stunned the audience by performance the now famous Cobra maneuver: he reared up his Flanker’s nose like a striking serpent to a ninety-degree angle—then further to 120 degrees!—while continuing to coast forward on his original vector, showcasing the design’s ability to achieve incredibly high angles of attack. You can see it here.

After the collapse of the Soviet Union, an impoverished Russia sold Su-27s to China in exchange for food. Beijing then arranged to license-manufacture their own clone, the Shenyang J-11. However, China cut the licensing agreement early and to Russia’s fury produced more advanced derivatives including the J-11B and J-11D.

Ethiopia also acquired export-model Su-27SKs, where the Flanker saw its only major air-to-air combat experience. Between 1999 and 200, Ethiopian Flankers shot down four Eritreans MiG-29s for no losses, nearly all the kills achieved with short-range R-73 missiles—as medium-range R-27s all missed. Flankers were also used in a ground attack role by Angola and Russia. An Su-27 also bears the tragic distinction as causing the deadliest air show accident in history when one plowed into a crowd at the 2002 Sknyliv airshow, killing seventy-seven.

Three or four hundred Su-27s remain in Russian service, many of which have been modernizing its older Flankers to the new Su-27SM 1–3 models by installing new avionics, radars and long-range missile support. The air forces of Angola, Kazakhstan, Uzbekistan, Vietnam, Ethiopia, Eritrea and Mongolia also still operate Su-27s.

The basic Su-27 can only carry a limited payload of unguided bombs and rockets. Beijing wanted a strike plane similar to the F-15E Strike Eagle that could employ precision-guided weapons while still holding its own in air-to-air combat. In the mid-1990s they commissioned Russian manufacturer KnAAPO to build them one called the Su-30MKK.

Attack planes benefit from having a Weapon Systems Officer in the backseat to operate precision-guided weapons, so the Su-30 was derived from the two-seat Su-27UB trainer (the Flanker-C). However, the MKK is distinguished by enlarged rear rudders and fuel tanks, improved N001VEP and later Zhuk-MSE radar with surface-search capability, and compatibility with Russian Kh-31 anti-radar missiles, Kh-29 ground-attack missiles, laser-guided bombs and Kh-59 cruise missiles.

The Su-30MKK is made from composite carbon fibers to lower weight, affording it greater range and improved subsonic maneuverability. It also features a two-way radio communication system allowing an MKK to network with its squadron mates and serve as a sort of mini-AWACS. China acquired seventy-six MKKs—twenty-four of which were MK2 variants optimized for anti-shipping missions—and also produced an upgraded domestic copy with an AESA radar, the J-16 Red Eagle. Venezuela, Vietnam, Uganda and Indonesia also operate Su-30MKKs and MK2s.

In the 1990s, India also expressed interest in a multirole Flanker, but the Indian Air Force (IAF) had more ambitious upgrades in mind that would also improve air-to-air combat capabilities. The rival Irkut corporation offered a design incorporating vector-thrust technology pioneered in an Su-37 tech demonstrator.

The resulting Su-30MKI features flexible canards—a second small set of wings closer to the nose—which provide improved maneuverability and low speed handling, though at a slight cost to speed and range. Another radical change was the incorporation of AL-31FP turbofans with two-dimensional vector thrust nozzles—which means the nozzles can literally turn left and right to aid the aircraft in performing even tighter maneuvers than usual.

Avionic upgrades include a Bars N011 PESA radar with a search range over 200 miles, Israeli-built cockpit displays and jammers, and Indian-made radar warning receivers. In addition to a range of Russian guided weapons, the Su-30MKI can carry Indian Astra long-range air-to-air missiles and can even lug huge 5,000-pound Brahmos-A cruise missiles that can strike land or naval targets at nearly three times the speed of sound.

India has around 270 Su-27MKIs, which, along with thirty-six Rafale fighters on order, constitute its most advanced fighters. They have dueled repeatedly with American jets in exercises and often come out on top. Some argue that Indian fighters prevail in these exercises because the IAF refused to allow the use of radars and AWACS.

The Su-30s have also proven accident-prone and maintenance intensive. The AL-31s experienced sixty-nine engine failures between 2012 and 2015—and the IAF has grounded the fleet on at least three occasions, once because the ejection system triggered midflight without cause.

Nonetheless, the Russian military was so impressed with the MKI it commissioned its own Su-30SM version outfitted with only Russian avionics. Over 100 serve in the Russian air force, twenty fly with Naval Aviation and a number saw combat over Syria. Algeria and Malaysia also operate their own customized Su-30 models based on the MKI, while Su-30SMs are serving in Kazakhstan and Myanmar, and are on order for Belarus.

The Su-33: the Carrier-Based Flanker-D

The Soviet Union’s first aircraft carriers could only carry helicopters and subsonic Yak-38 jump jets that were unlikely to prevail when facing conventional jet fighters. In the 1980s, Moscow began building larger carriers with a ski-jump flight deck that could accommodate a Flanker variant designated first the Su-27K, then the Su-33.

In order to takeoff and land on a carrier’s cramped flight deck, the Su-33 has larger flaps and control surfaces—as well as canards—to generate lift and improve low-speed handling, as well as reinforced landing gear to withstand the impact of harsh landings. As many as thirty Su-33s serve onboard Russia’s only carrier, the Kuznetsov, alongside newer MiG-29Ks. These saw their combat debut in 2016 when they launched raids on Syrian rebels—though the air wing was temporarily transferred to land bases in Syria after one Su-33 crashed attempting to land due to a defective arrestor cable. China managed to acquire an Su-33 prototype from Ukraine and created a copy called the J-15 Flying Shark with upgraded avionics. These now serve as China’s onboard China’s first aircraft carrier, the Liaoning. However, both the J-15 and the Su-33 can only carry limited weapon and fuel loads because the ski-jump ramps of their respective carriers significantly limit maximum takeoff weight.

Russia continues to operate Su-24 supersonic two-seater light strike bomber designed to penetrate enemy airspace at low-altitude, similar to the retired U.S. F-111 Aardvark. However, the Su-24 has poor odds facing enemy fighters—so as early as the 1980s engineers at Sukhoi began designing an enlarged Su-27 to serve as a bomber.