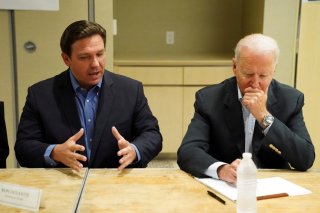 The budget set aside more than $400 million for direct payments, as nearly 174,000 Sunshine State first responders, along with 180,000 educators are expected to receive the aid. DeSantis noted that he anticipates the payments to be sent out over the summer, but the Florida Department of Economic Opportunity has already begun issuing the relief to first responders after the initiative was first announced.

“We know that the pandemic put an awful lot of strain on our first responders, [emergency medical technicians], sworn law enforcement, firefighters and so we believe that we should recognize their sacrifice over the last year,” DeSantis said upon passing the legislation.

Nearly $208.4 billion of the money allocated for the direct relief effort will be distributed to police, fire and emergency personnel as a “small token of appreciation.”

And the extra aid for Florida’s teachers will come from funds in the Elementary and Secondary School Emergency Relief Fund, a measure that was part of President Joe Biden’s coronavirus relief package.

“The past year included so much uncertainty for our state’s students, parents and educators,” DeSantis said.

The governor added, “In Florida, we knew how important it was for our students to return to school, and our principals and teachers answered the call.”

The move comes as other states across the United States have offered certain residents additional one-time payments.

The California legislature approved Gov. Gavin Newsom’s (D) California Comeback Plan last week, which sends a second round of $600 payments to nearly 66 percent of residents in the state. Eligible recipients must be earning up to $75,000 in adjusted gross income and must not have received the first round of state relief this year.

Maryland Gov. Larry Hogan (R) also sent certain residents one-time payments of $300 per individual or $500 per family. Nearly 425,000 Marylanders are eligible for the payments under the RELIEF Act, a measure that the governor passed in February.