Flying With One Wing: Meet the F-15 Pilot Who Did the Impossible 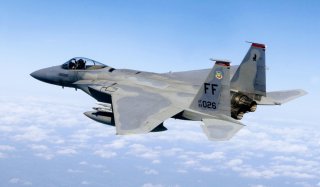 Despite entering service nearly a half-century ago, the McDonnell Douglas F-15 Eagle remains one of the most potent and capable air superiority fighters on the planet. The Eagle may not be as technologically advanced as its fifth-generation stablemates, the F-22 Raptor and F-35 Joint Strike Fighter, but what it lacks in stealth the F-15 makes up for in classic Cold War-style: with incredible engineering and good old fashioned brute force.

That brute force was, in no uncertain terms, considered a necessity for the Air Force as it pursued development of what would become America’s Eagle in the 1960s.

Throughout much of the ‘50s and the better part of the ‘60s, it wouldn’t have been unfair to say that the Soviet Union was winning the Cold War. The Space Race to that point had been practically one-sided, with the Soviets being the first to put a satellite, an animal, and a person into orbit, as well as the first to reach the moon, Venus, and Mars with probes. In the skies over earth, Soviet fighters were among the best in the world. The sweep-wing MiG-23 was widely considered to be superior to America’s workhorse F-4 Phantom, but even more pressing was the Soviet MiG-25.

When the Pentagon first got wind of the MiG-25 Foxbat in 1970, the aircraft’s large wing area coupled with two powerful engines suggested to intelligence analysts that it was a highly capable air superiority fighter. Those fears were exacerbated in March of 1971, when Israeli radar operators picked up an unusual Soviet aircraft traveling at an astonishing Mach 3.2 at altitudes higher than the F-4 or even Soviet MiG-23 could manage. Israeli fighters tried to shoot the aircraft down months later when it returned, but it simply blew past them at better than Mach 3.

Armed with their limited understanding of this new Soviet super-jet, the Air Force redoubled their efforts to field a purpose-built dogfighter that could actually stand toe-to-toe with the Foxbat.

Within five years, the F-15 Eagle would enter service with the new MiG set squarely in its sights. It could fly at speeds in excess of Mach 2.5, thanks to a pair of powerful Pratt & Whitney F100-PW-220 afterburning turbofans that actually produce more thrust than the aircraft’s drag and weight combined. In other words, the F-15 is so powerful that it can actually accelerate while flying straight up. That high thrust-to-weight ratio coupled with a low weight-to-wing area also allows for a high degree of maneuverability, making for what the Air Force hoped would be a superior combination of traits when compared to the Soviet powerhouse MiG-25.

Of course, just a few years later, the United States would get their hands on a MiG-25 thanks to defecting Soviet pilot Flight Lieutenant Viktor Ivanovich Belenko and the world would learn that the frightening Foxbat wasn’t all that scary after all. All that speed had actually come as a result of numerous design compromises, and in fact, the MiG-25 was never even an air superiority fighter at all… it was really an intercept platform designed to close with American bombers quickly, not for an acrobatic dogfight against other jets.

In the years that followed, the F-15, an aircraft designed to compete with an imagined air dominance fighter without equal, would devour its competition in fight after fight, scoring numerous wins at the hands of Israeli pilots. In fact, the first air-to-air kill in an F-15 was logged by an Israeli in 1979, and since then, Israeli pilots have racked up no fewer than 60 more shoot downs from the cockpits of Eagles.

But the most incredible thing an Israeli pilot may have ever pulled off with the venerable F-15 came in 1983, when pilot Ziv Nedivi and instructor Yehoar Gal managed to land the top-tier fighter after losing its entire right wing in a mid-air collision.

Related: HOW AN F-15E SHOT DOWN AN IRAQI GUNSHIP WITH A BOMB

On May 1, 1983, elements of the Israeli Air Force’s 106th and 116th squadrons took to the skies over the Negev desert for a training engagement that would pit two new F-15Ds against four older A-4N Skyhawks. It was an “airfield defense” exercise, with the F-15s playing the role of defenders, and the A-4s serving as aggressors.

The Skyhawks were dated attack aircraft, each of which would pose little threat to an F-15 in a one-on-one fight, but they had both numbers and experience on their side. At the stick of one of the two Eagles was Zivi Nedivi, a pilot who was still training to fly the venerable Eagle, under the tutelage of Yehoar Gal, an experienced F-15 pilot riding in the back seat.

At the time, the F-15 was still a flashy new ride, having entered service for the United States in 1976 and Israel the following year, but the aircraft’s chops were already firmly established. In fact, Nedivi was flying an F-15 known within the Israeli Air Force (IAF) as “Baz” (or Falcon) 957, which had scored an impressive four kills against MiGs a year prior in the Lebanon War.

Now, here in the United States, pilots training against one another are required to maintain what’s known as a safety bubble. This five hundred foot or more “bubble” is maintained around each aircraft to ensure collisions don’t occur during the high-speed maneuvering inherent to dogfighting, or as pilots tend to call it, executing Basic Fighter Maneuvers (BFM). No aircraft should enter another plane’s safety “bubble.”

As the two Israeli F-15s swung into action against their A-4 aggressor opponents, the reason for this training bubble became pretty apparent.

It wasn’t long before the Skyhawks and Eagles were all screaming through the sky, each jockeying for position and looking for a decisive kill. After a great deal of maneuvering, the number 3 Skyhawk, tail number 374, was ready to strike, targeting Nedivi’s wingman in the other F-15. Unbeknownst to the Skyhawk pilot, however, Nedivi’s Baz 957 was positioned just above and behind him, preparing to fire his own notional missiles.

As the Skyhawk pilot attempted to lock onto the other F-15, he inverted his aircraft and began to climb–unaware that Nedivi’s F-15 was flying directly above him by then.

The two jets collided, with the Skyhawk impacting the F-15 right where its right wing met the fuselage. The A-4 came apart almost immediately after the impact, allowing just enough time for its pilot to eject safely. The F-15 had lost its entire right wing and immediately went into a downward spin. As Nedivi attempted to regain control of the fighter, his instructor Gal told him to prepare to eject as soon as it was stabilized enough to do so. In the chaos, neither knew the extent of the damage to their aircraft.

“I opened afterburner, which is a totally opposite instinct when you’re spinning toward the ground, then the roll slowly stopped and slowly I was able to bring the nose back up,” Nedivi explained.

Nedivi, though he was technically the student in that setting, was senior in rank to his instructor, and opted not to punch out as he regained some degree of control, still totally unaware of how severe the damage was. As the plane leveled off, he and Gal looked over their right shoulders to see a wall of fuel vapor pouring out of the wing area. Because of the cloud of fuel being lost, neither could see the extent of the damage beyond it. Nedivi tried reducing their airspeed, and the aircraft once again began to roll. Nedivi, aware that there was an airstrip just over ten miles out, made a decision.

He hit the F-15’s two powerful afterburners once again, capable of increasing the output of each engine from 14,590 pounds of force to a whopping 23,770 pounds. With fuel pouring from the wing of the aircraft and the twin Pratt & Whitney F100-PW-220 engines dumping the rest into the burn, it was a gutsy call, but it managed to level the aircraft out and get them pointed in the right direction.

What Nedivi and Gal still didn’t know was that their mid-air collision with the Skyhawk had actually sheared the entire right wing of their F-15 straight off the fuselage just about two feet from its root.

With ten miles to cover and little more than vapor left in the fuel lines, the two men were doing the impossible: They were flying in an F-15 with just one wing.

In order to keep the aircraft stable, Nedivi had to maintain a high airspeed, which made touching down a difficult proposition. He knew that the recommended airspeed for landing an F-15 was right around 130 knots, just shy of 150 miles per hour. As he lowered his tail hook and brought the F-15 down to the tarmac, they were actually flying at close to 260 knots (right around 300 miles per hour).

“I was landing at approximately twice the normal landing speed. I put the tail hook down and there was a cable about a third of the way down the runway and it went into that cable.”