Flying Tank: The A-10 Warthog Is Still Legendary 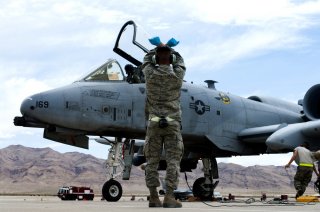 Here's What You Need to Remember: A chorus of concern from lawmakers — and the A-10’s exemplary performance in the ongoing air attacks against ISIS — led the Air Force to extend the planned service life of the aircraft into the 2020s.

Known for an ability to keep flying after taking multiple rounds of enemy machine gun fire, land and operate in rugged terrain, destroy groups of enemy fighters with a 30-millimeter cannon and unleash a wide arsenal of attack weapons, the A-10 is described by pilots as a “flying tank” in the sky — able to hover over ground war and provide life-saving close air support in high-threat combat environments.

“It is built to withstand more damage than any other frame that I know of. It’s known for its ruggedness,” A-10 pilot Lt. Col. Ryan Haden, 23rd Fighter Group Deputy, Moody Air Force Base, told Scout Warrior in an interview.

“The A-10 is not agile, nimble, fast or quick,” Haden said. “It’s deliberate, measured, hefty, impactful, calculated and sound. There’s nothing flimsy or fragile about the way it is constructed or about the way that it flies.”

“There are things built-in for redundancy. If one hydraulic system fails, another one kicks in,” he said.

If the aircraft loses all of its electronics including its digital displays and targeting systems, the pilot of an A-10 can still fly, drop general-purpose bombs and shoot the 30-millimeter cannon, Haden explained.

Unlike other aircraft built for speed, maneuverability, air-to-air dogfighting and air-to-air weapons, the A-10 is specifically engineered around its gun, a 30-millimeter GAU-8/A cannon aligned directly beneath the fuselage.

“The 30-millimeter cannon has seven barrels. They are centered the way the aircraft fires. The firing barrel goes right down the center line. You can point the aircraft and shoot at the ground. It is designed for air-to-ground attack,” Haden explained.

Haden explained the gun alignment as being straight along the fuselage line without an upward “cant” like many other aircraft have. The windows in the A-10 are wider, giving pilots a larger field of view with which to see and attack targets.

The engines of the A-10 are mounted high so that the aircraft can land in austere environments such as rugged, dirty or sandy terrain. The engines on the A-10 are General Electric TF34-GE-100 turbofans.

There have been many instances where A-10 engines were shot up and the pilots did not know until returning from a mission, Haden said.

“We shoot really close to people. We do it 50 meters away from people,” Haden explained. “I can sometimes see hands and people waving. If I get close enough and low enough I can see the difference between good guys and bad guys and shoot.”

“We deliver the munitions by actually going from a base position — then pointing the jet at the ground and then pulling the trigger once we reach the desired range,” he explained.

The aircraft can carry 16,000 pounds of mixed ordnance — eight can fly under the wings and three under the fuselage.

During the early months of combat in Operation Enduring Freedom, in a battle known as “Operation Anaconda,” Haden’s A-10 flew to help American troops attacking Taliban fighters in the Afghan mountains.

During the March 2002 mission, Haden was able to see and destroy Taliban anti-aircraft artillery, guns and troop positions.

Many lawmakers, observers, veterans, analysts, pilots and members of the military have been following the unfolding developments regarding the Air Force’s plans for the A-10. Citing budgetary reasons, Air Force leaders had planned to begin retiring its fleet of A-10s in 2016.

Some Air Force personnel maintained that other aircraft such as the F-16 and emerging F-35 multi-role stealth fighter would be able to fill the mission gap and perform close air support missions once the A-10 retired.

However, a chorus of concern from lawmakers — and the A-10’s exemplary performance in the ongoing air attacks against ISIS — led the Air Force to extend the planned service life of the aircraft into the 2020s.

The Air Force has a begun a three-pronged strategy to replace or sustain the A-10 which involves looking at ways to upgrade and preserve the existing aircraft, assessing what platforms might be available on the market today or designing a new plane.

The overall costs of the program including life cycle management, sustainment and upkeep had made the A-10 budget targets for the service. But in addition to pushback from lawmakers, the A-10’s performance in the Middle East is creating an operational demand for the durable aircraft.

The debate about what, if anything, might replace it is likely to continue.

Kris Osborn previously served at the Pentagon as a Highly Qualified Expert with the Office of the Assistant Secretary of the Army - Acquisition, Logistics & Technology. Osborn has also worked as an anchor and on-air military specialist at national TV networks. He also has a Masters Degree in Comparative Literature from Columbia University. This article originally appeared at War is Boring in 2017.