Flying Tanks: How the P-47 Gave Birth to the Fearsome A-10 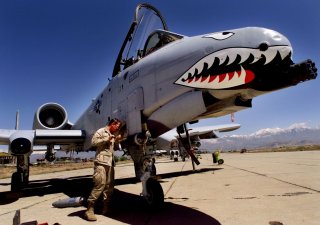 Key point: These planes can take a punch and dish out a lot of punishment. Here's how they both served as vital close air support.

Everyone loves a Thunderbolt.

Today's A-10 Thunderbolt II, also known as the Warthog, is possibly the most beloved aircraft in the U.S. arsenal, or at least it is to American ground troops (to the Air Force brass, the Thunderbolt is a Thunderpain).

But 75 years ago, there was another Thunderbolt. It, too, was a scrappy brawler of an warplane.

At first glance, there is little family resemblance between the two planes The P-47 Thunderbolt of the Second World War was a fast, high-altitude fighter designed to battle the Luftwaffe for control of European skies. The A-10 Thunderbolt II is a low-altitude ground attack aircraft originally designed to shoot up Soviet tanks during the Cold War.

Yet both aircraft have a lot in common. Not to be uncharitable, but both Thunderbolts are as aerodynamically ugly as flying pigs. The P-47 was affectionately nicknamed "the Jug" (short for "juggernaut"), perhaps a nod to its beefy, thick-bodied fuselage. Compared to a svelte five-ton P-51 Mustang or a three-ton Spitfire, the seven-ton Jug resembled a flying truck. And the A-10, with its engines mounted above the tail and a big cannon sticking out the nose like a case of aerial acne? Only a mother airplane could find the "Warthog" handsome.

But, of course, both Thunderbolts had the same father. The P-47 was built by Republic Aircraft. Republic was acquired in 1965 by Fairchild, which became Fairchild Republic, manufacturer of the A-10.

The Thunderbolt brothers were famous for their ability to dish out a huge amount of firepower. Armed with eight .50-caliber machine guns, the P-47 packed a devastating punch. The A-10's 30-millimeter cannon with depleted-uranium shells made mincemeat out of Iraqi tanks in the First Gulf War.

Both aircraft could also absorb incredible amounts of damage. The P-47 was legendary for its tough construction and large, armored cockpit. “Even with its complicated turbo supercharger system, its sturdy airframe and tough radial engine could absorb a lot of damage and still return home,” wrote historian Cornelius Ryan in “A Bridge Too Far.” “Some pilots readily chose to belly-land their burning Thunderbolts rather than risk bailing out; there are instances of P-47s crash-landing after being shot down, hitting trees and absorbing impacts severe enough to snap off wings, tail, and engine, while the pilot escaped with few or no injuries.”

While the P-47 could take a pounding, the A-10 positively relished it. Designed to survive the dense cocoon of anti-aircraft missiles and guns that would protected Soviet tank columns blitzing into Western Europe, the Warthog was built to take hits that would easily down a sleek F-15 or F-16 fighter. The cockpit is encased in titanium that can resist cannon fire, there are redundant hydraulic flight controls (with mechanical backup in case the hydraulics fail), and the engines mounted above the tail produce less of an infrared trail for ground-launched heat-seeking missiles to home in on. On top of which, there is something scary about an airplane that is expressly designed to make it back home minus half a wing.

Both Thunderbolts also share a reputation as deadly ground attack aircraft. The A-10 destroyed 23 tanks in one day. More surprising was the P-47, which was actually a formidable air combat fighter that accounted for more than 3,000 Axis aircraft. Its rate of climb wasn't impressive, nor its low-altitude maneuverability, but the heavy Jug was so relentless in a dive that German aircraft often couldn't escape a P-47 on their tail.

But the Jug really came into its own as the premier U.S. fighter-bomber in Europe.  Armed with bombs, 5-inch air-to-ground rockets and its eight machine guns, the P-47 terrorized German ground forces. From D-Day in June 1944 to Germany's surrender in May 1945, the Jug was credited with destroying 86,000 railway cars, 9,000 locomotives, 6,000 armored fighting vehicles and 68,000 trucks.

Neither Thunderbolt was ever the coolest plane in the hanger. The P-47 lacked the range and the agility of the P-51. Yet the Jug would have its revenge. The U.S. Air Force junked the P-47 after World War II but kept the Mustang, just in time for the Korean War to erupt. With jets like the F-86 handling the air superiority role, the Mustangs were relegated to ground attack missions. Unfortunately, the P-51's more fragile construction and liquid-cooled engine -- which would seize up if damaged -- resulted in heavy losses to Communist flak that the P-47 would certainly have survived.

As for the A-10, its successor may be the F-35 Lightning II. Which you would want to be the pilot of a Lightning that loses half a wing from a cannon shell?

Cool-looking, they're not. But no one messes with a Thunderbolt.