Folding Bridges: How the U.S. Army Crossed Chasms on the Battlefield 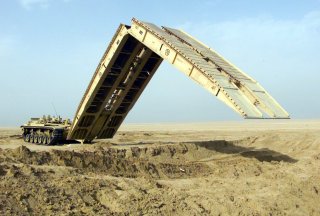 Here'sWhat You Need to Remember: The folding bridge can support the Army’s M1A1 Abrams tank, but only using a cautionary crossing at a reduced gap length of fifteen meters and only at a reduced crossing speed.

Whether the U.S. military could ever build a bridge to the future isn’t known, but when the Army comes across a section of trenches or water obstacles, the M60A1 AVLB was up to the task. Developed in the early 1960s and produced by General Dynamics Land Systems Division, the Armored Vehicle Launching Bridge kept the men and material rolling throughout the Vietnam War, the Gulf War and the War in Afghanistan before being retired by the U.S. Army in 2003 as it was superseded by the M104 Wolverine.

The platform was based on either an M60 or M48 tank assembly, which is used to transport and launch and retrieve a folding portable bridge and even deploy it during combat. The sixty-foot scissor-type bridge is capable of supporting tracked and wheeled vehicles with a military load bearing capacity of up to “Class 60” at eighteen meters—or support for seventy tons of equipment at fifteen meters. The bridge, which has a roadway width of twelve feet and six inches, can be retrieved from either end. Emplacement can be accomplished in as little as two to five minutes, while retrieval can be achieved in less than ten minutes.

The folding bridge can support the Army’s M1A1 Abrams tank, but only using a cautionary crossing at a reduced gap length of fifteen meters and only at a reduced crossing speed. The Armored Vehicle Launching Bridge has a crew of two enlisted men, and it weighs fifty-eight tons including the folding bridge.

It was powered by a twelve-cylinder diesel engine, but it was far from a speed demon, especially off road. Its maximum speed (governed) was just thirty mph and it had just an eight to twelve mph cross country speed. The vehicle’s range was 290 miles. While it was meant to deploy bridges over wide trenches, the M60 chassis could still deploy over trenches up to 8.5 feet.

During the Cold War, the bridging vehicle was deployed to West Germany with the U.S. Army Combat Engineer units in support of the North Atlantic Treaty Organization.

The United States had been the primary operators of the M60A1 AVLB, but it has also been employed by the Israeli Defense Forces, which also deployed the American-built system during the Yom Kippur War, the 1982 Lebanon War and in the 2014 Israel-Gaza Conflict. Pakistan, Portugal, Singapore and Spain are also operators of the platform—while the Greek military had used a dozen of the AVLBs during the Cold War until 2015.

The platform remains in service with the U.S. Army National Guard, while the United States Marines Corps, which adapted it in the late 1980s, began replacing the M60A1 AVLB with the M107 Joint Assault Bridge last year.