Foreign Bases for China's Nuclear Submarines May be Next 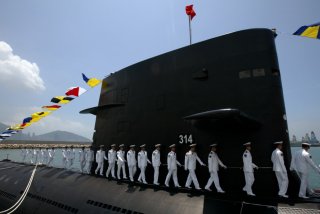 Here's What You Need To Remember: Then, the Chinese analysts make the rather startling assertion that “as the submarine force ‘goes out,’ it is necessary to insist on overseas support, and also the principle of economizing the force. The Navy command should secure equipment and logistics for the submarine force abroad for the purpose of increasing the time of the submarine force in the distant seas.