Forget the Drones: For This Air Force Pilot, The Future Belongs to the F-35 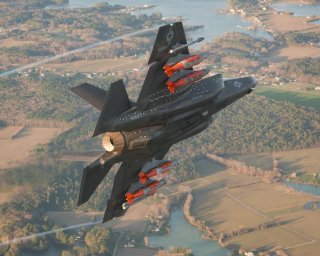 As a fighter pilot, I have a lot of respect for what Elon Musk has accomplished. His ability to not adhere to dogma has allowed him to revolutionize two industries through SpaceX and Tesla. Much like a physicist, he relies on first-principle science to solve problems, which allows him to see things from a fresh perspective. However, he is wrong about the fighter jet era being over.

“Locally autonomous drone warfare is where it’s at, where the future will be,” Musk said to Air Force Lt. Gen. John Thompson at the Air Force Association’s Air Warfare Symposium.

RELATED: WHY 5TH GENERATION ‘MINUS’ FIGHTERS ARE THE FUTURE

As a fighter pilot, my job is to not fall in love with the aircraft I fly, but to use it as a tool to accomplish a mission. We are constantly looking for ways to optimize our lethality while minimizing risk. If there is a better way to accomplish a mission, then it is our duty to use it. While I agree with Elon Musk that the future is drone warfare, I think we’re a lifetime away from seeing a fully autonomous Air Force.

Unmanned Aerial Vehicles (UAVs) have fundamentally altered the way we train and fight. I’ve integrated with them extensively over my career and seen first-hand how valuable they are. Their persistence is unmatched—an MQ-9B recently flew for nearly 2 days without having to refuel. The sensors they carry are equally impressive, due to the weight savings from not having to keep a pilot alive. Perhaps most important, though, is that they don’t put human lives at risk.

It’s important to understand that these UAVs are not autonomous—there is someone, usually half a world away, controlling every move by the aircraft. They are a lot more, in effect, like scaled-up radio-control aircraft than they are like robots. As we move away from limited conflicts like Afghanistan and Iraq to near-peer adversaries with high-end capabilities, it’s becoming increasingly difficult to maintain the integrity of that signal. This means that to replace manned fighters, these drones will need to be autonomous, or make decisions on their own, in order to be effective.

As Elon Musk is finding out, making an autonomous vehicle is incredibly difficult. While Tesla’s autopilot can navigate reasonably well on highways, they have a much harder time in the city. There are so many edge cases (problems that only occur under extreme circumstances) involved in city driving that are nearly impossible to predict. When several of these one-in-a-thousand events happen simultaneously, the car’s autonomous software becomes overwhelmed. Remember, these cars are operating in a highly regulated environment where the rules are clearly defined.

Combat is the most dynamic environment imaginable. The fog and friction of war prevent a full understanding of the battlefield. In addition, the enemy is specifically targeting your weaknesses. Teslas don’t have to fight state actors that are specifically trying to make them crash.

Imagine a city that is more like “Mad Max,” where there are adversaries painting street lines into telephone poles and shining lasers into the car’s cameras—they wouldn’t go a block without being disabled.

The same is true for an autonomous drone—it not only has to be able to make decisions on its own, but it must overcome an adversary that is specifically targeting its weaknesses. And that is where the human brain thrives—coming up with dynamic and creative solutions to undefined problems.

The current Venn Diagram of manned and unmanned aircraft capabilities is so far apart that neither is close to being replaced. The future is finding ways for both to operate as seamlessly as possible.