Forget Germany, U.S. Troops are Needed in Poland and the Baltics 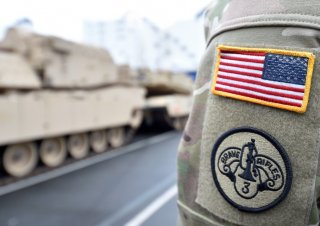 Here's What You Need to Remember: The next administration should continue and enhance President Trump’s strategy of increased military support for our NATO allies along the alliance’s eastern flank. Adhering to the existing establishment orthodoxy is a gift to Putin, and the new Biden administration likely would do just that.

Defense establishment resistance to President Trump’s plan to redeploy U.S. troops from Germany to Poland, the Baltics and the Black Sea region exposes an antiquated way of deterring Russia. The Trump administration announced in July that it was moving 5,600 members of the U.S. V Corps from Germany to Poland and other North Atlantic Treaty Organization (NATO) countries. A broader redeployment should take place in the long run.

Critics say that pulling U.S. troops from Germany is a gift to Vladimir Putin, but then they complain that redeployment places U.S. troops in range of Russian nuclear and conventional arms, as if American forces had not spent the forty years of the Cold War under a similar threat. This thinking toward Russia is schizophrenic.

The leaders of the Baltic states have called for NATO to help reinforce their forces for years, but institutionalized attitudes toward Poland and the Baltics reek of, “You’re on your own.”

“While there is nothing wrong with increasing the modest United States military presence in Poland, this must not be at the expense of a strong foothold in Germany, where American forces stood in the hundreds of thousands amid the Cold War and have been reduced in the last few decades,” a report written by Michael O’Hanlon of the Brookings Institution said. “But there is no reason for this to come at the expense of capabilities in Germany, which would play complementary roles to American bases in Poland in any such critical deployment.”

This argument is pure sentimentality. American troops remained in Germany after World War II to deter dozens of Soviet and East German divisions from pouring through the Fulda Gap in the former West Germany.

Germans hate the idea of redeployment and claim that it will weaken the alliance. Senator Mitt Romney called the idea of moving troops out of Germany a “slap in the face at a key ally, a friend, and a great country.”

Such a strategy equals fighting the last war. It’s like Poland’s resistance to the Nazi invasion in 1939 with horse cavalry against tanks or France’s reliance on the Maginot Line. Times change and so should strategy. It makes no sense to cede the field of battle to the Russians from the start, which current NATO planning does. Vladimir Putin or his successors will not care much about Romney’s (or other Germanophiles) sentiments toward Germany if he chooses to invade.

The NATO establishment has failed to deter Russia’s repeated provocations against NATO’s Eastern flank in recent years. These include the introduction of nuclear-tipped Iskander short-range ballistic missiles that threaten Warsaw along with Russia’s invasion and annexation of the Crimea and invasion of Eastern Ukraine in 2014.

Deterrence against potential Russian aggression should dictate strategy instead of outdated territorial orthodoxies.

Having the bulk of American forces in Europe in Germany makes little sense if you have to transport them by rail to Poland or the Baltic states in case of a Russian invasion over a seven-to-ten-day period. In that time, the approximately 100,000-200,000 Russian troops based in the Kaliningrad region along Poland’s northern border and near Russia’s border with the Baltics will have had ample time to overrun allied forces.

“How long it would take European allies to muster additional credible forces for a potential third wave, given the atrophied state of some European allies’ forces, is even less clear. One study concluded that even British, French, or German forces would have a hard time providing a combat-ready heavy brigade at short notice,” a 2018 Carnegie Endowment report said.

Carnegie also noted that getting a force in place is a logistical nightmare because Russia has an overwhelming advantage and because of the “atrophied” state of NATO logistics.

“The flow of NATO’s reinforcements—by air, sea, and land routes—could be disrupted by Russia’s substantial modern anti-access and area denial (A2/AD) capabilities, which are centered in the Kaliningrad exclave and around Saint Petersburg,” the Carnegie Endowment said in a 2018 study.

A 2016 Rand study theorized, based on Russia’s 2014 internationally unrecognized annexation of Crimea, that a Russian annexation of the Baltic states might not be off the table. In that case, any NATO counter-offensive would face the possibility of tactical nuclear strikes.

At present, America and its NATO allies lack adequate heavy armor in the Baltics to impede Russia from quickly overrunning those nations. Opponents will complain about the costs of redeployment to Poland, the Baltics and the Black Sea region, but such costs will be dwarfed by what it would cost to liberate such territories from a Russian invasion. Prevention costs less than reactive measures.

Russia’s invasions of Georgia and Ukraine demonstrated its ability to rapidly overwhelm its enemies. Having the right forces, both nuclear and conventional, in place on Day Zero will send a strong message to Vladimir Putin that waging any sort of military action against the Baltics, Poland, or in the Black Sea region is unwinnable.

Deterring Russia means going toe to toe with it. U.S. nuclear forces should be deployed to Poland as a bargaining chip to compel the Russians to withdraw their nuclear weapons from Kaliningrad.

As things stand, Putin views NATO is a paper tiger that will back down every time it’s confronted. Continuing a dated 1980s Germanocentric strategy for deterring Russia in the 2020s and beyond is a losing proposition.

The next administration should continue and enhance President Trump’s strategy of increased military support for our NATO allies along the alliance’s eastern flank. Adhering to the existing establishment orthodoxy is a gift to Putin, and the new Biden administration likely would do just that.

John Rossomando is a senior analyst for Defense Policy and served as Senior Analyst for Counterterrorism at The Investigative Project on Terrorism for eight years. His work has been featured in numerous publications such as The American Thinker, Daily Wire, Red Alert Politics, CNSNews.com, The Daily Caller, Human Events, Newsmax, The American Spectator, TownHall.com and Crisis Magazine. He also served as senior managing editor of The Bulletin, a 100,000-circulation daily newspaper in Philadelphia and received the Pennsylvania Associated Press Managing Editors first-place award in 2008 for his reporting. This article first appeared last month and is being republished due to reader interest.