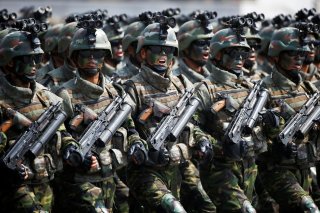 Here's What You Need to Remember: North Korea’s arms industry is poor and backward but full of surprises. Pyongyang’s infantry and special operations forces make up a disproportionate amount of its armed forces and a major part of its offensive capability, giving it considerable incentive to provide new technology when possible.

Kyle Mizokami is a defense and national-security writer based in San Francisco who has appeared in the Diplomat, Foreign Policy, War is Boring and the Daily Beast. In 2009 he co-founded the defense and security blog Japan Security Watch. You can follow him on Twitter: @KyleMizokami. This article first appeared several years ago.