Forgotten History: In 1944, Pearl Harbor Once Again Went Up In Flames 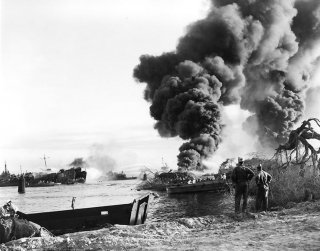 Here's What You Need To Remember: The accident was deemed was so shocking the Navy instituted a press blackout, and forbade witnesses from speaking about it.  Only a terse statement on May 25 conceded to “some loss of life” and a few lost ships. The board’s recommendation to discontinue nesting ships together to speed up ammunition loading was dismissed by Navy chief Admiral Chester Nimitz, who argued it was “calculated risk that must be accepted.”

Flames roiled into sky from dozens of burning ships, creating a wall of smoke that crept out into the Pacific Ocean. The thunder of multiple explosions succession shook the Navy Headquarters on Pearl Harbor.

Had Japan somehow pulled off a second, stunning raid on Pearl Harbor in 1944?

In truth the ships and men burning were victims of a horrifying accident born of inadequate safety measures—an incident the Navy kept under wraps for years.

In May 1944, a gigantic amphibious landing force began assembling at Pearl Harbor to carry U.S. Marines to capture the strategic Mariana islands from Japan, 3,700 miles away.

By May 21st, at least 29 Landing Ship, Tanks (LSTs) were strung beam-to-beam along six piers on West Loch—the western side branch of pincer-shaped Pearl Harbor.  These long boxy vessels displaced over 4,000 tons and 120 meters long.  The flat keels of the ocean-spanning ships allowed them to disgorge up to a company of tanks or infantry from their bow ramps directly onto a beach.

While roughly half the crew were on shore leave, the remainder rested onboard as the vessels were stuffed full of vehicles, ammunition and fuel. Dozens of barrels of high-octane gasoline were lashed to their decks to supply the vehicles once they were unloaded ashore.

At 3 PM Army stevedores began unloading 4.2” mortar shells from a smaller Landing Craft Tank (LCT) onto the elevator of LST-353.

So-called “chemical mortars” were used to deploy smoke rounds and burning white phosphorous shells to mark or obscure targets—as well as 24-pound high explosive rounds carrying eight pounds of TNT filler. But the heavy mortars proved too inaccurate fired firing from the LCTs, leading to their transfer back to LSTs.

The personnel conscripted for the heavy lifting came from the 29th Chemical Decontamination Unit, a largely African-American unit which untrained in ammunition handling.

No one knows exactly what caused a fireball to erupt on LST-353 at 3:08 PM, because no nearby witnesses survived.

Perhaps one of the stevedores dropped a 4.2” shell. Some suggest sparks from a carelessly tossed cigarette, or from sailors doing spot welding, ignited the fuel vapor wafting from the roughly 80 barrels of gasoline tied next to the elevator.

Just a few soldiers managed to jump into the water before the eighty fuel drums erupted like a volcano, throwing a cloud of burning debris, oil and body parts high into the air which came raining down onto the decks of neighboring LSTs.

Three minutes later, another blast left LST-43 in flames. The oil drums on her deck too exploded, feeding the unfolding chain-reaction.  You can see the apocalyptic scene in this recording.

The oil-soaked water caught fire, and flames spread to the adjoining pier 8. Some inexperienced crews abandoned ship before they were consumed by fire. Others did everything they could to save their vessels, but fires raged around the mooring lines tying the boats to the pier, preventing easy escape. Finally, one of the flaming boats rammed into pier, setting another LST on fire.

Surviving LSTs began frantically sputtering away from the fiery piers, some under their own power and others by the gallant intervention of tugs—eleven of which were damaged in the rescue effort. LCM landing craft crept close to the blaze to spray ships with firehoses. Smaller LCTs trawled for survivors but accidentally ran over several in the smoke.

Finally, a third explosion boiled through the harbor, causing flaming debris to drizzle from the sky over a half-mile away and shaking window panes up to 15 miles distant.

An errant phosphorous shell landed on Joseph Francis midway through loading 350 tons of ammunition from a depot. Her crew put out the chemical fire before it could cause a massive explosion. The blazing wrecks of LST-43, -179 and -69 then began drifting towards Joseph, but thankfully came to a halt just 500 feet away.

Though a final explosion resounded at 10:30 PM, ships continued to burn for days afterward.

The Navy officially counted losing 163 personnel and suffering 397 wounded though some accounts. But this number reportedly may not include Army and Marine personnel.  Marine deaths may have ranged between 80 and 300 dead.  61 Army personnel, mostly African Americans, were reported dead or missing.

The Navy’s plans for Operation Forager were too big to be long delayed, even by such disastrous losses. The fleet departed just 24 hours later than intended after hasty repairs, leaving behind wreckage on West Loch that would take months to clear away.

Meanwhile, a promptly convened board of inquiry dismissed the theory of a Japanese submarine attack and zeroed in on the ammunition-handling as the likely cause of the accident. Though criticizing some crews for abandoning ship too readily, no one was held at fault.

The accident was deemed was so shocking the Navy instituted a press blackout, and forbade witnesses from speaking about it.  Only a terse statement on May 25 conceded to “some loss of life” and a few lost ships. The board’s recommendation to discontinue nesting ships together to speed up ammunition loading was dismissed by Navy chief Admiral Chester Nimitz, who argued it was “calculated risk that must be accepted.”

At West Loch a huge cleanup effort eventually dredged up all but one of the scorched LSTs and dumped them out into sea, along with the wreckage of Japanese mini-submarine Ha-16, which had participated in the Pearl Harbor attack.

In 1960, classification was lifted and the press finally detailed the incident in 1964. A plaque commemorating those who died was installed in 1995, and two years later a lone survivor’s account, The West Loch Story, was published by William Johnson.

Today, the corroded prow of LST 480 can still be seen protruding from the waters off West Loch—a solemn reminder of the tragedy that unfolded there 75 years ago.

Sébastien Roblin holds a Master’s Degree in Conflict Resolution from Georgetown University and served as a university instructor for the Peace Corps in China. He has also worked in education, editing, and refugee resettlement in France and the United States. This article first appeared in 2019.