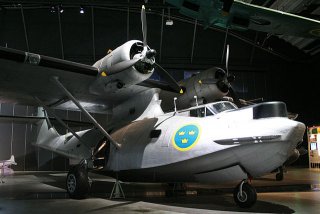 Here's What You Need to Remember: Although slow, it was also used in anti-submarine warfare (ASW), convoy escort, search and rescue and cargo transport missions.

While it may have been the U.S. Army Air Force B-17 and B-24 bombers that received all the glory during the Second World War, it was aircraft such as the Consolidated PBY Catalina that played a major role in the war effort. Developed in the 1930s, the prototype Catalina first flew in 1935. The aircraft served with every branch of the United States military during the war.

Designated “PBY”—PB for “Patrol Bomber” while the Y was the code assigned to Consolidated—by the U.S. Navy, the twin-engine, parasol-mounted monoplane was equipped with a flying boat hull as well as retractable tricycle landing gear and retractable wing-tip floats. Originally designed as a patrol bomber thanks to its long operational range, it was intended to locate and attack enemy transport ships at sea.

Although slow, it was also used in anti-submarine warfare (ASW), convoy escort, search and rescue and cargo transport missions. It saw use during World War II in both the Atlantic and Pacific theaters, but was also used in the Indian Ocean. In service with the Royal Canadian Air Force, a Catalina was credited with sinking the German U-boat U-361.

The PBY was the most numerous aircraft of its kind, and it proved so reliable in its role that the last of the World War II era aircraft weren’t retired until the late 1950s, while the Brazilian Air Force used the Catalina into the 1980s. The OA-10 was the U.S. Army Air Forces’ version, where it was primarily used for air-sea rescue work or “DUMBO” missions. During World War II the USAAF’s Emergency Rescue Squadrons saved hundreds of downed fliers.

A total of 2,500 Catalinas were produced—with most coming off the Consolidated Aircraft Corp. line, while Canadian Vickers Ltd. and the Naval Aircraft Factory also produced the aircraft. Approximately 380 served with the USAAF.

After World War II, the Catalina was used in civilian service for passenger flights in Alaska and the Caribbean, while the aircraft were also used in fire-bombing with the U.S. Forest Service.

A surviving aircraft is now in the collection of the National Museum of the United States Air Force. It was flown to the museum in 1984, restored and painted as an OA-10A assigned to the 2nd Emergency Rescue Squadron in the Pacific in WWII.